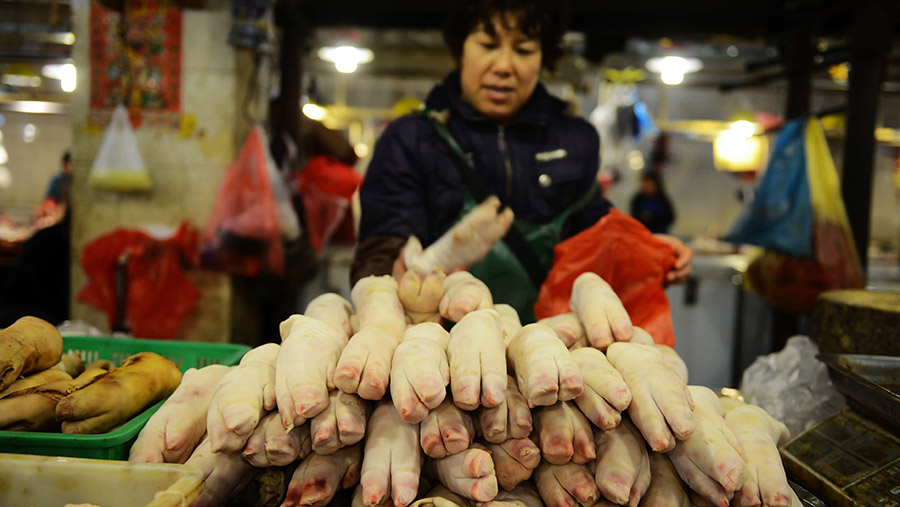 Pork producers are set to see the value of pigs increase after China gave the go-ahead for six UK pork processing sites to begin exporting trotters.

The deal could be worth millions of pounds to the sites – five in England and one in Scotland – which belong to Cranswick, Karro and Tulip, according to the National Pig Association (NPA).

While trotters have little or no value in the UK, they are seen as a delicacy in China, where they retail for about £6/kg.

The announcement follows lengthy negotiations involving Defra, the AHDB and a host of other agencies and government departments, the NPA said.

And, AHDB international market development director Phil Hadley said: “This is fantastic news for both the pork sector and the individual businesses.

“It is the first time that trotters from these sites will be shipped to China.”

In the year-to-date, about one-third of UK total pigmeat export volumes were shipped to China – up 58% on last year.

Those exports mean the total pigmeat exports so far this year are worth £369m – of which the Chinese market is valued at £93m – a rise of 111% compared to the same time last year.

The increase in volume has been driven by China’s need to fill a void in supply left by the devastating impact of African swine fever on its own pig herd.

China’s demand is also continuing to fuel a rise in pig prices with the EU-spec SPP up 1.15p to 156.92p/kg for the week ending 19 October.

The latest SPP is now more than 11p above the same week last year and the five-year average, according to figures published by AHDB Pork.

However, pig supply was slightly higher than the previous week, the sector body reported.