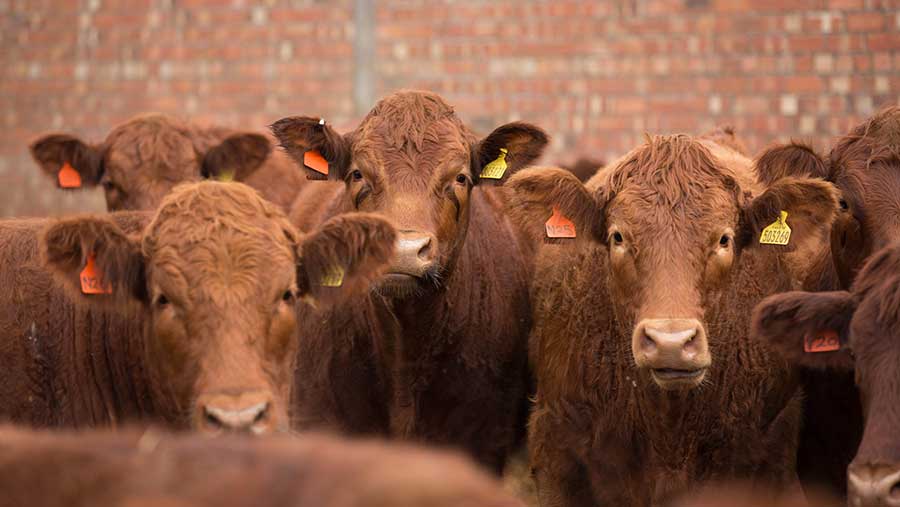 Fat cattle producers are likely to see beef prices rise in the next few weeks as the effect of Christmas causes demand to increase, auctioneers have said.

Average prices have been falling in recent weeks because of the traditional lull between the highs of the summer barbecue season and increased demand for the Christmas market as well as small increases in throughput as farmers clear out livestock ahead of housing.

However, at the markets auctioneers reported a solid trade for quality animals atbutchers and processors despite the rising numbers.

Auctioneer Paul Gentry at Newark Livestock Sales said quality cattle had sold very well this week, but the overall price was being held back by “less well-fed animals coming off grass”.

“Farmers are selling cattle straight off low-quality, late autumn grazing rather than house them for the winter,” Mr Gentry said.

But he said that prices for cattle sold on 31 October were already showing signs of improving ahead of Christmas, with the best animals hitting 250-260p/kg liveweight.

“I am expecting the market to tighten up further in the next week for the better, well-fed cattle,” Mr Gentry added.

The firm trade for good-quality cattle at Newark was matched at Northallerton Auctions, particularly for heifers and steers.

Principal auctioneer Giles Drew said throughput was up by about 5%, but trade for heifers and steers had remained good for the past eight to 10 weeks.

“The butchers’ trade is looking good for heifers, while the plainer bulls are achieving much lower prices,” Mr Drew said.

This week’s mart on 30 October saw in-spec bulls of between 480kg-650kg reach 220p/kg liveweight compared with the average clean prime of up to 260p/kg liveweight, he said.

“I think we will see the Christmas trade kicking in, perhaps within the next week or two, and prices will firm up further for all cattle,” Mr Drew added.

According to AHDB Beef and Lamb figures, the GB all-prime average dropped by 1.59p/kg to 362.7p/kg deadweight in the week ended 27 October.

The fall continued a recent weekly downward trend, while throughput remained relatively steady at about 34,100 head – up by just 2,000 head.

However, the slight increase in numbers forward, due to farms selling off cattle ahead of winter housing, was enough to push supply beyond demand.

Across the specifications, the overall steer price remained the steadiest, recording a decline of 0.7p/kg week-on-week, to 364.7p/kg deadweight.

AHDB analyst Rebecca Oborne said the overall young bull price could be volatile and this is where the biggest decline of the week was seen at 8.8p, to 336.4p/kg deadweight.

Prices for cull cows followed similar trends, with the overall price decreasing by 4.5p on the week, to 215.3p/kg and cow carcasses meeting the –O4L specification dropped by 5.8p, to 242.1p/kg, Ms Oborne said.

“Reportedly, some processors are indicating there are large numbers of cows on offer to them as farmers prepare for winter, in a similar vein to clearing out prime cattle ready for the same reason. This may be dampening the price,” she added.