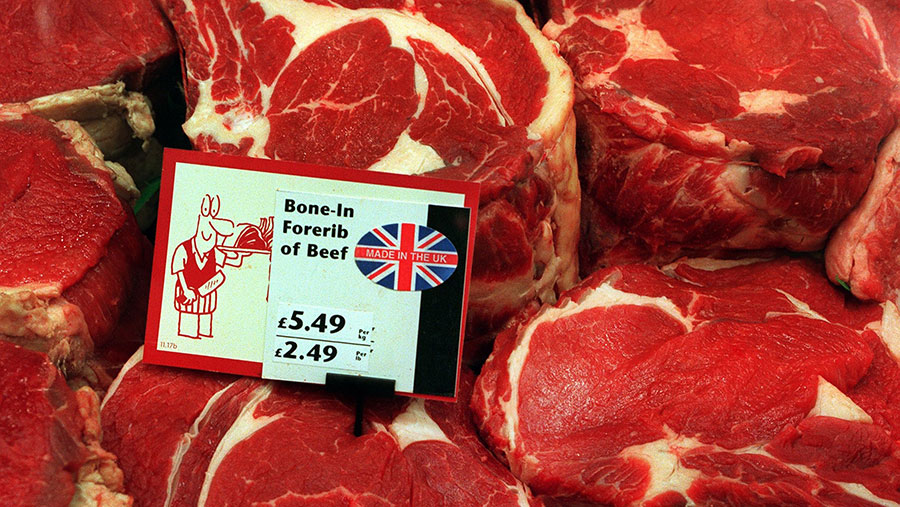 Retail spending on beef rose by nearly 27% during the coronavirus lockdown period, according to sales data from market analyst Kantar Worldpanel.

The biggest increase in spending was seen with minced beef, which rose by 34.5% as consumers sought out cheap, easy-to-cook options, particularly during the first weeks of the Covid-19 pandemic.

Sales of beef steaks also enjoyed a strong run, especially towards the end of the 12 weeks, rising by 43.9% during the last four weeks of the period when compared with the same point in 2019.

Overall, the volume of beef steaks sold increased by 24%.

The average price of steaks during this time did fall slightly – as retailers introduced promotional offers to increase sales of higher-end cuts to improve the carcass balance.

“This dovetailed into a significant UK-wide campaign funded by the Ring-Fenced Fund, combining the efforts of the three levy boards in Wales, Scotland and England, which will have helped drive the UK-wide appetite for red meat,” said Mr Llywelyn.

The pork retail market also grew by nearly one-quarter over the 12 weeks to mid-May, compared with the previous year.

However, the picture for lamb was more challenging, with lockdown restrictions hitting demand during the crucial Easter and Ramadan periods.

Headline figures show total spending on lamb fell by just over 1.4%, despite a 7% increase in the average price and a small increase in the number of consumers buying lamb.

While there was a 15% drop in the spend on lamb roasting joints sold, the volume of lamb chops sold rose by 23.4%, resulting in a spend increase of 25.2%.

One of the big questions around lockdown has been how much the rise in retail demand for red meat has offset the fall in demand from the food service sector.

This is a grey area, as figures for red meat consumption in the food service sector are difficult to quantify, since it covers pubs, restaurants, takeaways, deliveries, as well as canteens, schools and other institutions.

Analysis by the AHDB suggests that during the early weeks of lockdown, demand for red meat was lower overall, despite the increase in retail sales.

But during the month of May there was an uplift in beef demand, as good weather led to increased appetite for barbecue meats, which means total demand for beef is now slightly up year-on-year.

While the lamb market missed out on its seasonal jump, lamb demand is now steady on the year, and at the start of June it was looking like the rise in retail sales had just about offset the removal of the eating-out market.

Meanwhile, strong growth in bacon and sausage sales have helped retail pork sales to offset the removal of the eating-out market.