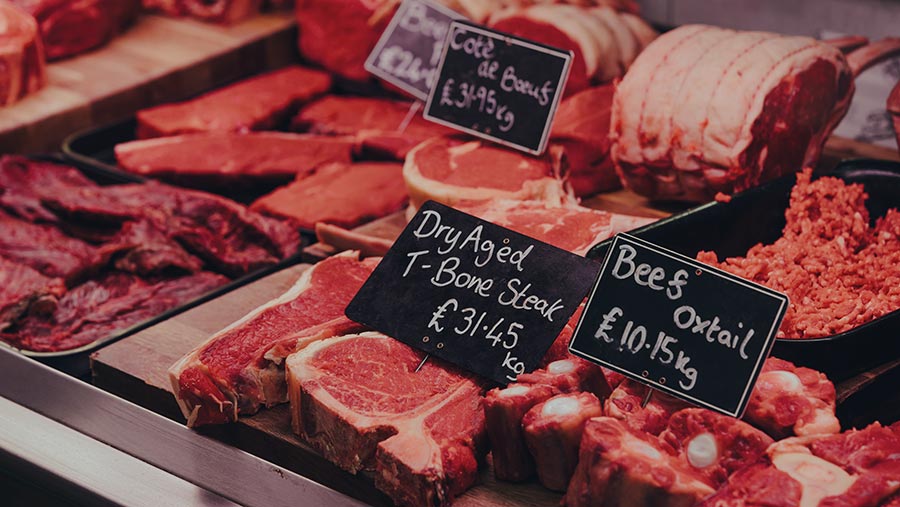 The coronavirus pandemic has caused a shift in food buying habits, with butchers’ shops among the biggest beneficiaries.

Spending during each visit was also up. In the year to 21 March 2021, shoppers spent almost 50% more a trip in butchers’ shops compared to meat counters at other retail outlets.

See also: 4 tips to get staff to buy into farm biosecurity protocols

The shift was reflected in a survey released by Hybu Cig Cymru – Meat Promotion Wales (HCC) – which showed custom was driven by quality perceptions.

Responses from 2,000 people suggested quality was the main motivation for 50% of visits to butchers’ shops, while 38% wanted to support local business during the pandemic.

Further impetus was provided by the collapse of the foodservice market, particularly in the first lockdown, which saw consumers switch to more home-cooking.

Retail grocery spending over the past 12 weeks is 15.6% higher than pre-pandemic levels in 2019, according to Kantar.

Shoppers spent £134 a head more than in retail outlets during the same period two years ago.

However, the latest 12-week period reveals a slowdown when compared with the record highs of the panic-driven buying at the start of the pandemic in 2020.

The figures show grocery sales slowed to 7.4% higher in the 12 weeks to 21 March 2021 compared with the same period last year.

Kantar analyst Fraser McKevitt explained: “The anniversary of the first national lockdown means we begin to compare grocery sales against the record-breaking levels seen in the early days of the pandemic.

“Growth has not surprisingly dipped as a result.”

To put that into context, shoppers made 117m fewer trips to the supermarket in March 2021 compared with those fraught weeks in March 2020, he said.

Mr McKevitt suggested buying was about to accelerate as lockdown restrictions ease.

Almost two-thirds (61%) of consumers plan to socialise with friends and 23% are considering a barbecue if the weather is good.

Growing confidence among the vaccinated population is also fuelling optimism and a slowing down of online grocery sales, Mr McKevitt said.

While online sales were 89% higher in the four weeks to 21 March 21 compared with year-earlier results, that represented a 1% decline from the record high of 15.4% in March 2020.

Over-65s made 6.8% more trips to shops in the past four weeks compared with the this time a year ago, he added.