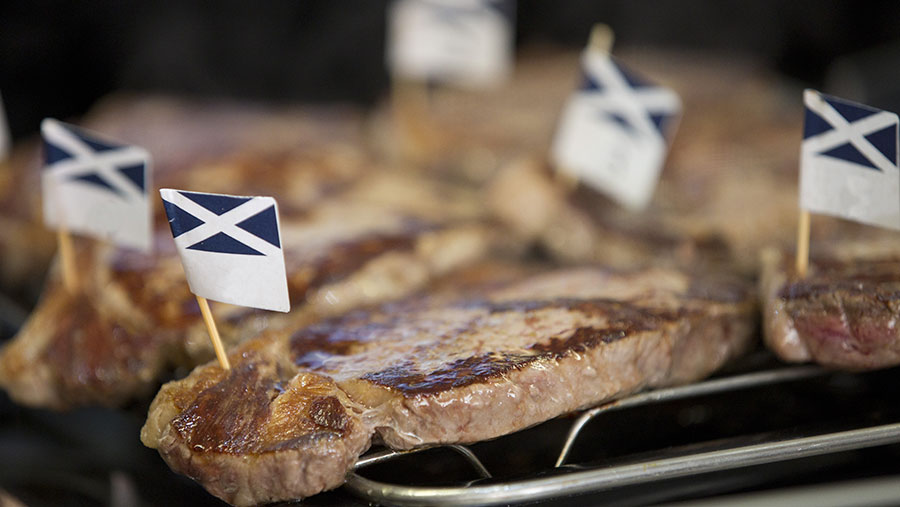 The coronavirus pandemic has hit the value of Scottish beef and lamb exports, which fell from £82m to £75.5m in the year to the end of July 2020.

Quality Meat Scotland’s annual export survey shows the total value of Scottish red meat and offal sold outside of the UK contracted by nearly 8%, taking it below the five-year average.

Beef sales fell by about 12% in value and volume, although exports still generated nearly £41m of revenue, compared with about £50m last year.

See also: Red meat levies to be returned to home nations from 2021

The average value of Scotch beef exports was almost one-quarter higher than for non-Scotch beef, with Italy and France the biggest customers.

The value of Scotch lamb exports dropped from about £32m to £26m as volumes required by the market dropped, although a 10% lift in the average value per tonne of the lamb that was exported did provide a partial shield to revenues.

In contrast, offal sales grew during the period, tripling in volume and doubling in value to more than £9m.

Iain Macdonald, senior economic analyst at QMS, said the decline in beef and lamb volumes reflected the near closure of export markets in mid- to late March, when public health measures were first introduced to control the spread of Covid-19.

“The prolonged closure of the food service sector meant that demand remained weak throughout the second quarter of 2020, while increased freight costs reduced the viability of some markets.”

Mr Macdonald said the results reinforced how important EU markets were to Scotland, with 97-99% of the beef and lamb trade and 80% of the offal trade involving EU partners.

While it is reassuring that exporters are accessing new markets in Canada and Japan, it is hard to see how they will offset any potential disruption to trade with the EU at the beginning of 20201, if no free trade agreement is agreed, he said.

“Scottish exporters have a number of long-standing relationships with EU importers that would be difficult to replace if significant new barriers to trade were to make them unviable.”