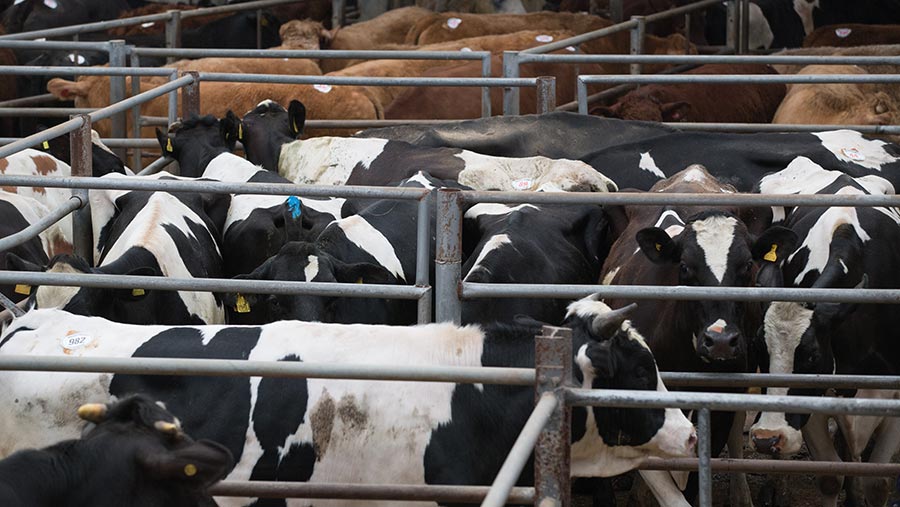 The gap is currently at about 80p/kg deadweight, compared with about 140p/kg this time last year.

Cull prices rose 2p/kg for the week ending 16 April to average 353.7p/kg deadweight. This marks a rise of 77p/kg on year-earlier levels.

Prime cattle prices have also been increasing, with a deadweight average of 436.7p/kg for heifers in the week to 16 April.

Demand for cheaper cuts and mince is likely to be behind the rise in cull values, suggested Neil Adams, managing director at consultant Promar International.

“We have seen the deadweight price of cull cows increase at a faster rate than prime beef. However, there may not be much more of a move – expect it to stay in step,” said Mr Adams.

“Demand is good, especially as we move into the barbecue season. Generally, people want British, but there is no cheap meat on the Continent to depress domestic prices.

“There is strong demand right across Europe – Irish cull cows are at 4/kg, which is broadly equivalent to UK prices, taking into account transportation.”

Mr Williams said processors were short-staffed last autumn and were not able to chill down as much supply as usual, which would normally come into the market at this time of year when cattle numbers are tighter.

Prices are expected to remain relatively supported in the short to medium term, according to Mr Williams, with cow prices normally peaking in June.

“At a normal culling rate of 25% with 5% deaths [no value] and 20% sold, the increased value equates to 0.5p/litre, whereas our forecast increase in cost of production to March 2023 is 6p/litre. But any increase in income is important, particularly as the Basic Payment Scheme declines,” Mr Powell said.

Industry reports suggest low stocks and an increased demand for VL beef, particularly in the US, are driving global beef prices.

More cattle are coming forward due to a combination of high cull cow prices and increasing on farm feed costs.