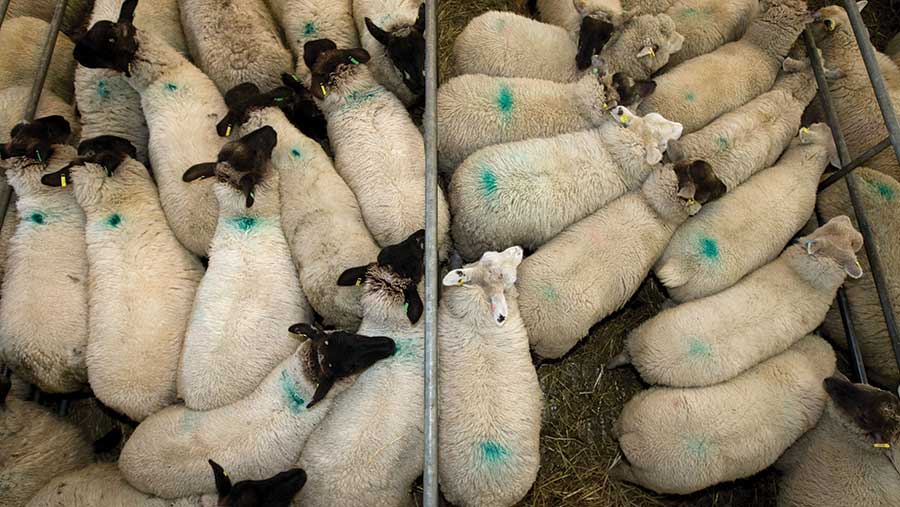 Deadweight lamb values have continued to rise, with supplies of old-season stocks dropping and the main flow of the 2021 crop yet to kick in.

Although the low ebb between crops is a seasonal norm, this year’s trough has been wider and deeper, driving up prices.

Supplies continue to be affected by a rush to sell lambs at the end of 2020 amid concerns over post-Brexit trade, according to the AHDB. The rush depleted stocks and throughput dropped by 7%, year on year, after Britain left the EU on 1 January.

The price is more than £2/kg higher than a year ago.

The AHDB also published the first new-season SQQ deadweight average of the year at 693.7p/kg for the week ending 17 April.

However, the flow wasn’t yet enough to destabilise prices, he said, which were steady at 650p-660p/kg for old-season stock this week.

He reported that numbers forward were as much as 50% down on the week, causing some processors to suspend killing until new-season throughput picked up.

Lack of grass growth was adding to the problem, as producers were finding it difficult to finish lambs in the dry conditions, Mr McWhirter said.

As finishing times lengthened, he warned producers to ensure teeth were not starting to erupt, immediately cutting the value of 12-month old hoggets.

With the season in Scotland a month behind southern England, Farmstock joint operations director Jonny Williams said teeth were not yet a concern.

Demand for lamb continues to be strong and prices have risen again to break the 700p/kg mark, Mr Williams said.

Prices look to remain firm for the short term because supply is still tight. However, he suggested producers should keep an eye on quality.

Some processors have reported quality issues in older lambs and there are hefty penalties on out-of-spec lamb, Mr Williams warned.

He also highlighted that farmers continued to dip into replacement flocks, selling off ewe lambs to capitalise on the high prices.

This will have a long-term effect and put a bottom in the autumn gimmer trade, he suggested.

In contrast to the firm deadweight prices, AHDB figures have shown prices easing back at live lamb sales this week.