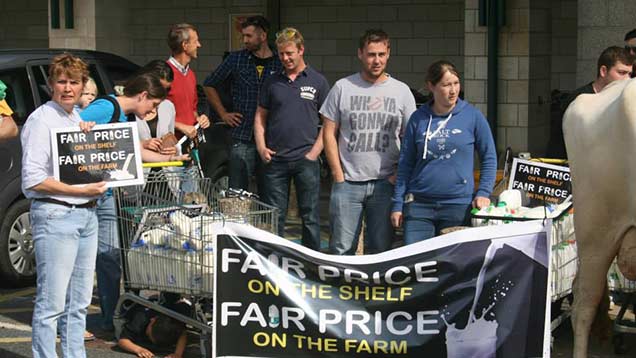 Farm leaders have announced an emergency summit to discuss the problems in the livestock and dairy sectors, which have left many farmers facing financial devastation.

The meeting will take place in London on Monday, 10 August and will be attended by the leaders of all the UK farming unions.

It comes after 10 days of protests from farmers, who have warned that falling prices have left many on the edge, with farmgate prices below the costs of production in many cases.

NFU president Meurig Raymond said many farmers were at crisis point, so it was important for the industry to show a united front.

“In dairy, many milk producers have seen price cut after price cut. It is simply not sustainable for any farmer to continue to produce milk if they are selling it at a loss.

“The plight of many farmers has become desperately serious and with no sign that things will improve, we really need urgent action from retailers, the food service sector and processors to show commitment to British dairy farmers.

“For many lamb producers, they too need evidence supermarkets will back British farming and give British lamb pride of place on the supermarket shelves.

“The understandable frustration of farmers is starting to spill over into actions that no one wants.”
Ian Marshall, Ulster Farmers Union

“British lamb is in its prime right now and I find it very concerning that some retailers are continuing to promote New Zealand lamb when we have prime lamb, in season, on our doorstep.”

NFU Scotland president Allan Bowie said there was real concern in Scotland at the desperate plight many businesses were facing due to severe financial pressures that has been ongoing for a number of months.

“There needs to be a clear understanding from all those involved that something has to change. For Scotland, it is not just dairy or the lamb market that are affected – all commodities are feeling it.

“Coupled with the ongoing adverse weather, we can see the significant pressure businesses are under.

“We know farmers are demonstrating elsewhere in the UK and we understand their concerns. It might not be long before Scottish farmers start to take action themselves.”

Stephen James, NFU Cymru president, said: “Let there be no doubt over the seriousness of the situation. As the UK unions we are looking for action to help alleviate the dire situation.

“By coming together and working as one I hope we can co-ordinate activity on several key action points that will not only benefit Welsh farmers, but farmers from across the UK.”

Ian Marshall, Ulster Farmers Union president, said the industry was facing a multi-factorial problem, both sectorally and geographically, for which there was no single solution.

“But it is essential that everyone in government and the supply chain play their part in helping to urgently address these genuine and serious difficulties. The understandable frustration of farmers is starting to spill over into actions that no one wants.”