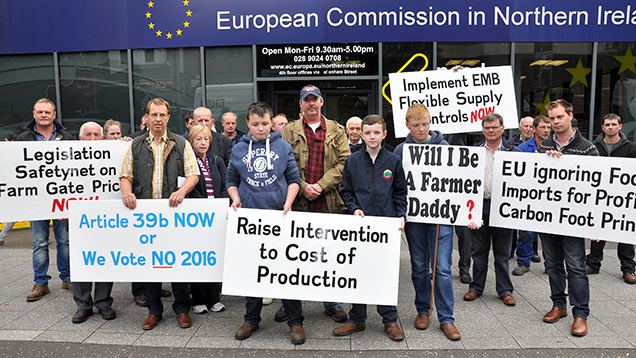 Up to 70 farmers staged a peaceful protest outside the European Commission’s office in central Belfast on Monday urging Brussels to step in and help solve the current farming crisis.

Although a token protest, the message to EU president Jean-Claude Juncker was clear – if Europe does not help, farming families will be out of business and out of their homes.

The main door to the commission’s office on the Dublin Road was closed and no farmer could get in.

See also: Farm leaders: ‘We need urgent help to get through this crisis’

However, police were under instruction to call the staff and ask them to come out to meet the farmers.

The head of the EC office in Belfast, Collette Fitzgerald, welcomed the farmers and spoke with several of them.

She said: “The commission is well aware of the difficulties farmers are facing. Even though some member states are worse off than others, we are engaging with them all to listen to what is going on in each region.

“We welcome this peaceful protest here today. Farmers are entitled to make their case.”

Ms Fitzgerald has been head of the EC office in Belfast for the past three years.

She said: “We are in constant touch with EU farm commissioner Phil Hogan and are keeping him updated on the crisis.

“Indeed, the commissioner visited Northern Ireland only a few weeks after he was appointed and understands the region’s farming sector very well.

“The commission is ready to engage, not just in Northern Ireland, but all over the EU to address this ongoing problem.

“I hope there is a great deal of positive news coming from the council meeting of ministers on 7 September, not just for the dairy sector but for all sectors.”

Farmers travelled from as far as County Tyrone to join the protest.

Andrew Sterling said: “We need a future. We got fed up sitting back doing nothing so decided to join the protest action. Something needs to be done to help the industry and fast.”

Dairy lobby group Farmers for Action (FFA) delivered a letter to the head of the EC office in Belfast addressed to president Juncker, highlighting the difficulties farmers were facing.

William Taylor, the Northern Ireland FFA co-ordinator, was pleased with how the protest went.

“Farming families are on their knees financially. We have reports of some living on beans and toast and some other families in County Down living off food banks,” he said.

“That is a crazy situation. The EC president Jean-Claude Juncker as well as the EU must face facts.

“They must realise that if the European Commission does not help us, farmers and their families will be forced out of the industry.

“Every sector in the industry in hurting and the European Union has the tools to help us. Now they must before it is too late.”