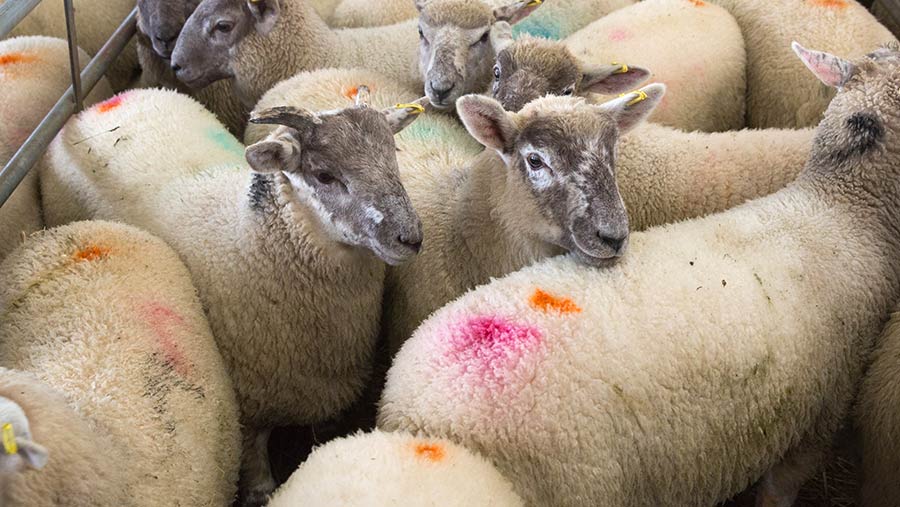 Deadweight lamb prices shot up by more than 40p/kg last week, bringing them within touching distance of £6/kg.

The GB deadweight SQQ for the week ending 13 November averaged 597.4p/kg, an increase of 40.9p/kg on the previous week, according to the AHDB.

This is the highest average lamb price seen since mid-June, and the seventh consecutive week-on-week increase.

Lamb liveweight prices also remain high for the time of year, but have not had the major uplift this week as seen with the deadweight price.

For the week ending 16 November, the AHDB calculated the new-season lamb liveweight SQQ at 265.93p/kg, down by 2.9p/kg on the previous week. This marginal price drop does, however, follow large week-on-week price rises for liveweight lambs during the first two weeks of November.

Trade was reported as good overall, with smart lambs dearer. Commercial lowland lambs were said to be back slightly on the week, while Mules and hill lambs were very similar to the previous week.

Store prices have been increasing in line with finished prices, according to livestock marketing group Meadow Quality.

Stratford Livestock Market had a strong trade for store lambs on Tuesday 16 November, with prices topping at £101 a head and averaging £78.61 a head.

Demand continues to outweigh supply, and plenty of buyers are said to be keen for all types of lambs.

Supply of finished lambs have been consistently below last year’s levels for several months.

Defra’s latest monthly slaughter statistics show UK clean sheep slaughterings totalled 1.12 million head for October – down 11% on the same month last year. Mutton and lamb production was down by 10% on the year to total 25,000t.

During the first 10 months of 2021, UK clean sheep slaughterings have totalled 9.39 million head, down by 11% on last year’s levels.