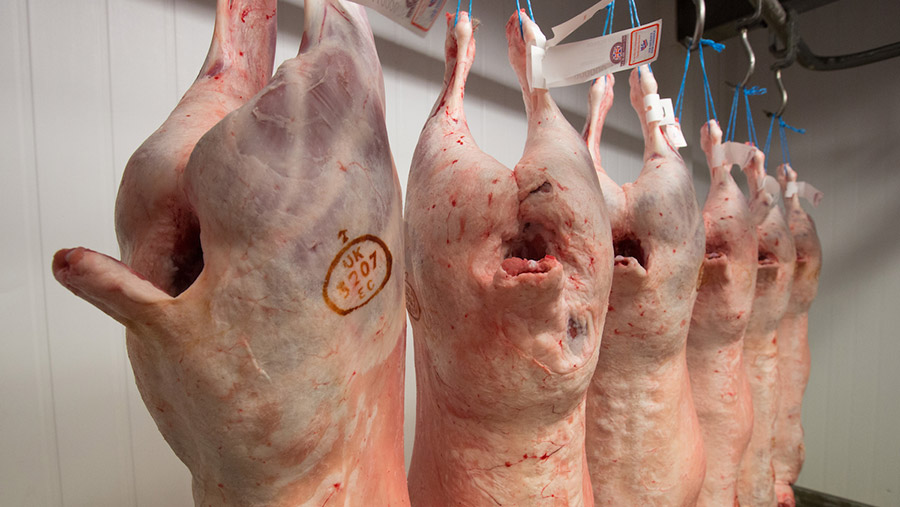 Lamb prices are showing signs of lifting as buyers start to gear up early for the Easter market.

Latest figures released by AHDB show that in the week ending 14 March, the GB liveweight OSL SQQ stood at 198.13p/kg/lw, which is around 10p/kg/lw higher than at the end of February.

Deadweight prices are also moving upwards, with Dunbia Llanybydder paying an extra 15p/kg on the week at 420p/kg for British lamb and 430p/kg for Welsh lamb, up 10p/kg.

Organic lamb is also up 10p/kg at 470p/kg and still drawing a significantly greater premium over conventionally-reared meat than last year.

Rebecca Oborne, red meat analyst for AHDB, said the market did look to be benefiting from buyers who were starting to get into their main Easter kill period.

“The numbers on the ground are a little bit short of where people might like them to be, so they are trying to draw out what supply there is out there.”

A total of 530 lambs were entered into the sale at Thrapston Market on 14 March, when they might normally sell 1,000.

The sale achieved an OSL SQQ price of 198p/kg/lw, which was about 12-14p/kg higher than the week before.

Russell Steer of Kivells said trade for prime spring lambs at Exeter Livestock Centre’s sale on Monday (18 March) had risen by about 10p/kg to a NSL SQQ of 220p/kg, with best export lambs making 240-260p/kg.

Buyers were favouring the lighter lambs, but a lot of the lambs coming forward were over-heavy because they’d had such a kind winter.

Meanwhile, according to HMRC trade data, there was a significant decline in the amount of lamb imported into the UK at the start of the year.

During January, the UK imported just over 5,000t of fresh and frozen sheepmeat – half of it from New Zealand – but this is nearly 1,500t less than a year earlier.

Sheep farmers have warned that a no-deal Brexit would “destroy” sheep farming in Northern Ireland.

Last week’s tariff announcements by the UK government that would kick in in the event of a no-deal Brexit contained protections for the UK sheep sector to prevent unfettered access to the domestic market from imports.

However, the government also said it would allow imported sheepmeat from the Republic of Ireland continued access to Northern Ireland tariff-free, while applying tariffs to sheepmeat going in the other direction.

The NI region of the National Sheep Association said 400,000 lambs a year flowed south because many abattoirs were located there, so sheep farmers were likely to be left with no choice but to pay tariffs.

“This would crush our industry and force many farmers out of business, an outcome which would be totally unacceptable.”