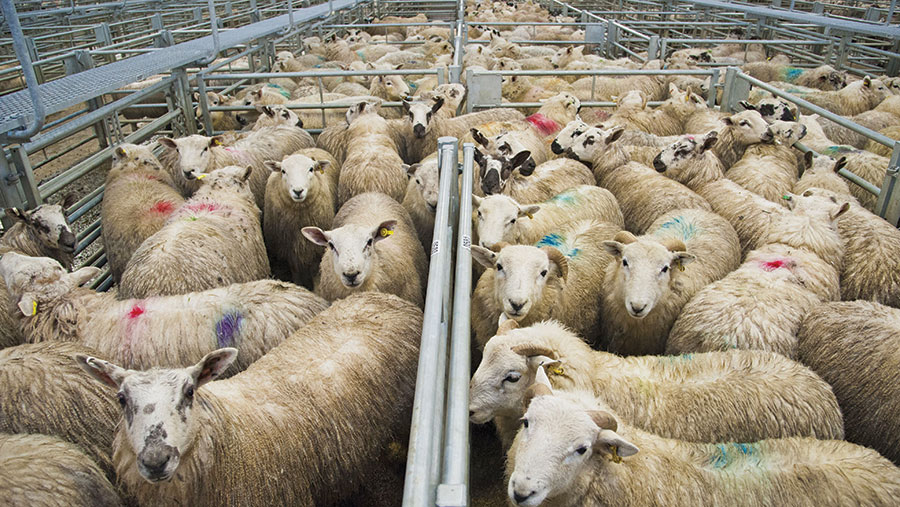 Lamb producers look set to enjoy a good run of trade into Christmas as domestic demand increases and the export trade is expected to be unhindered until the new year.

A good growing season and concerns about Brexit hitting exports has also seen numbers sold well ahead of last year, meaning buyers may have to compete more strongly for the remainder, said Mike Gooding, director at exporter Farmers Fresh.

About 400,000 more lambs from the 2019 lamb crop had been slaughtered by the end of September than by the same point in 2018, according to AHDB data.

This brings the total number of new-season lambs brought forward in 2019 to 5.26 million.

Trade at livestock markets jumped this week following the news on Monday that the EU had granted prime minister Boris Johnson’s request to extend the Brexit deadline until 31 January.

Average liveweight prices for 25.5-45.5kg lambs returned to above 170p/kg on Monday (28 October) for the first time since the beginning of September, a 5p/kg gain on the previous week.

Welshpool Livestock Market reported the strongest trade was for lambs under 38kg, with specialist finishers’ competition with processors for supplies sending prices to a high of 197p/kg.

The lowest demand was for overfat lambs and hill-bred lambs over 40kg.

In the week ending 26 October, average deadweight prices dropped by just under 2p/kg on the previous week, and remain almost 14p/kg below levels seen in the same week last year.

“There should be good demand for light lambs ahead of Christmas – about 15kg deadweight – for the Mediterranean countries,” said Mr Gooding.

He said it was vital for farmers to remain in very close contact with their buyers to stay up to date with what the most in-demand spec was from customers on a week-by-week basis.

This view was echoed by Jonny Williams, senior livestock procurement officer with Scottish marketing co-operative Farm Stock, who said that although the Christmas export trade had begun, demand was likely to peak in an extremely narrow window in early December.

The company has a fresh contract to send 12-15kg lamb carcasses into Italy this year, which will support prices for producers of smaller hill-bred lambs who have seen less demand in the past few years.

Mr Williams said he expected lamb trade to climb over the next six weeks as numbers of lambs on farms were dwindling at a faster rate than last year and domestic retailers were already coming into the market for their Christmas stocks.

Domestic trade is also likely to be supported by lower imports from Australia and New Zealand, as demand from China for all types of meat has increased following the devastating outbreak of African swine fever.

The improving farmgate situation comes amid a modest recovery in demand from consumers for beef and lamb over the summer after price promotions helped draw them back.

Market analyst Kantar Worldpanel’s figures for the 12-week period up to 9 September showed lamb sales increased by 2% in value and 1% in volume compared with a year earlier.

For beef there was a similar overall rise, but values were up by 1%, while volumes increased by 2%, with shoppers purchasing more mince and stewing steak, but fewer steaks.