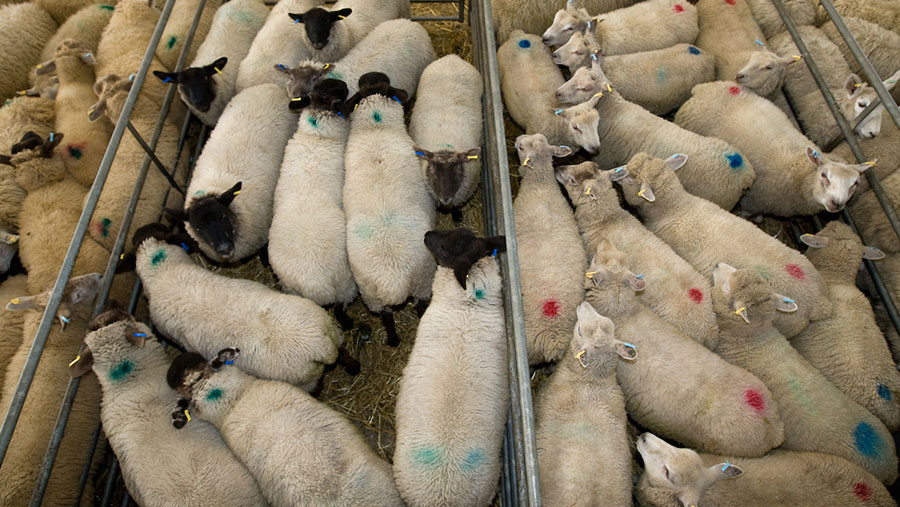 The fat lamb trade has dipped sharply in recent days after numbers at markets surged following a good trade in the past week.

Liveweight lamb prices for the week ending 30 June jumped close to 7p/kg on the previous week to stand at 230.6p/kg, making a 40kg lamb worth about £92.

However, prices fell back to average 221p/kg at markets yesterday (2 July) as more than 26,000 new-season lambs were sold around the country, up from almost 22,000 on the previous Thursday.

Even after the dip, the trade still remains well above the five-year average for the time of year, which is less than 200p/kg.

This is in part down to how well exports have continued to flow despite the coronavirus lockdown.

New HMRC trade data for the first four months of the year shows exports of lamb were down 18% compared to the bumper year of 2019, but broadly in line with 2018.

UK sales were also helped by a modest fall in New Zealand lamb imports, according to analysis by Welsh levy board, Hybu Cig Cymru (HCC).

HCC data analyst Glesni Phillips said: “HMRC’s UK trade figures for April mark the height of lockdowns in many countries and reflect a period when many restaurants and hotels – important markets for beef and lamb from Wales – were closed.

“However, although export volumes are down somewhat against last year due to the disruption, producers have adapted to changing demand.”

“We are seeing lockdowns being lifted gradually in many countries, which should help the foodservice trade, which is so valuable for the Welsh red meat sector.”

She said it was impossible to predict how quickly levels of hotel and restaurant demand will return to normal.

Abattoirs under the spotlight

Abattoirs have also come under widespread scrutiny in recent weeks after being linked to several high-profile coronavirus outbreaks in the US, Germany and the UK.

Just one UK red meat abattoir is currently shut down due to a disease outbreak – Sheffield-based Wooley Bros – according to Nick Allen, chief executive of abattoir trade body the British Meat Processors Association.

There are currently between 10 and 13 with reported outbreaks, which is only about 1% of the 1,079 red and white meat abattoirs in the UK, said Mr Allen.

He praised the work of government agencies, saying that a large investigation was now automatically triggered at any plant that reported more than six staff with confirmed symptoms, with national and local environmental health officials in attendance, as well as the Health and Safety Executive.

“The word we are getting from France is that demand [for exports] is there,” he said.

“It seems to that that everyone is still calm about coronavirus and we hope government can find a way of keeping exports going.”

With virus outbreaks likely to persist for a long time yet, he said it was vital for trade that work continued to find safe ways to keep businesses open as much as possible.

However, he warned that trade could come under pressure later in the year if uncertainty persists about the UK’s future trading relationship with the EU and farmers look to sell lambs rapidly ahead of the 31 December end to the transition period.