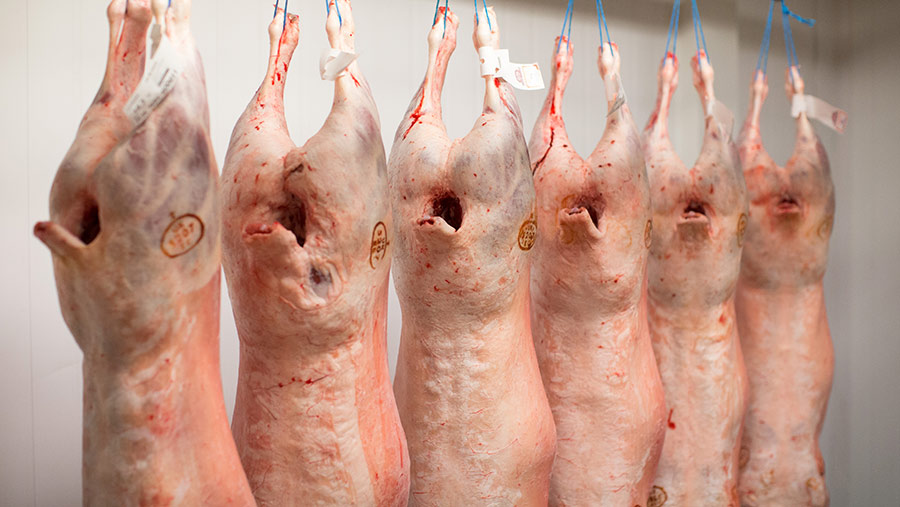 Lamb prices are up almost £1/kg deadweight on the year. The GB new-season lamb SQQ averaged 645.9p/kg deadweight for the week ending 9 July, up 8p/kg on the previous week.

Prices were buoyed in the past week by the Muslim festival of Eid al-Adha, which was celebrated on 9 July and 13 July.

Throughputs at abattoirs have climbed slightly week-on-week, but remain below the same week last year.

Retail demand is reportedly fairly limited, while export levels have been influenced by fluctuating exchange rates.

Sterling fell against the euro last week before showing signs of recovery, with exchange rates at £1:€1.18 on Wednesday 13 July.

Rizvan Khalid, managing director at Shropshire-based Euro Quality Lambs, said there was demand for lamb last week due to the festival, but export requirements have fallen back this week.

“We are focusing on exports to France at the moment, but lambs are being exported to Germany as well. It is a time of the year when sales can be a little bit temperamental – with it being hotter, sometimes sales aren’t quite as robust as we would like them to be for lamb,” said Mr Khalid.

Markets in the week to Tuesday 12 July saw the GB liveweight new-season SQQ fall by 16p/kg to 300.92p/kg, while auction throughputs were down 8% on the previous week.

Reports suggest the range for lamb prices was tightening, with premiums for best lambs dropping back, while the lower end of the market picked up.

Paul Ashton, auctioneer at Greenslade Taylor Hunt, said trade at Sedgemoor Auction Centre was better than expected on Monday 11 July, with well-fleshed, meaty lambs and heavier lambs having a strong trade. Finished lambs had an average SQQ of 290.14p/kg at the Somerset market.

Jonny Williams, joint operations director of livestock marketing group Farmstock, said retail sales were struggling and the festival had been a blessing considering the poor retail demand across all red meat sectors.

Prices have to date been holding up quite well for exports, according to Mr Williams, although he warned that French holidays could slow trade slightly.

Mr Williams said: “Lambs have still been coming forward up until now. With the dry conditions some people are getting rid of their cull ewes early and giving all of their best ground to their lambs to keep growth rates going. In the next fortnight we will start to see a few more moving.”

High feed costs and a lack of grass in many regions are likely to limit the size and number of finished lambs in some areas of the UK, with more lighter lambs and stores expected to come forward.

Mr Ashton said: “I think we will see a year where more people are going to be selling lambs as stores, simply because of the cost of feed. I still think it is very worthwhile feeding lambs, even with the cost of feed where it is.

“Speaking to a few people, they reckon their lambs are costing them £15-£20 a head to feed, but the lambs are achieving £35-£40 more because they have been fed. It is a big cost, though, and some people aren’t able to meet it.”

British beef and sheep farms averaged 35kg/ha of dry matter (DM) daily for the week beginning 11 July, according to GrasscheckGB.

This is well below average levels, with grass growth this time last year recorded at 60.6kg/ha of DM/day.

By region the 14-day forecast suggests 16.9kg of DM/ha/day in southern England, and 29.5kg in northern England. Scotland and Wales are put at 36.3kg and 27.3kg of DM, respectively.

Mr Williams said grass quality was really localised, and within five miles there were some areas with lots of grass and others that were really tight.

“Lambs are like sunflowers – they grow well with sun on their backs as long as they have food in front of them.”