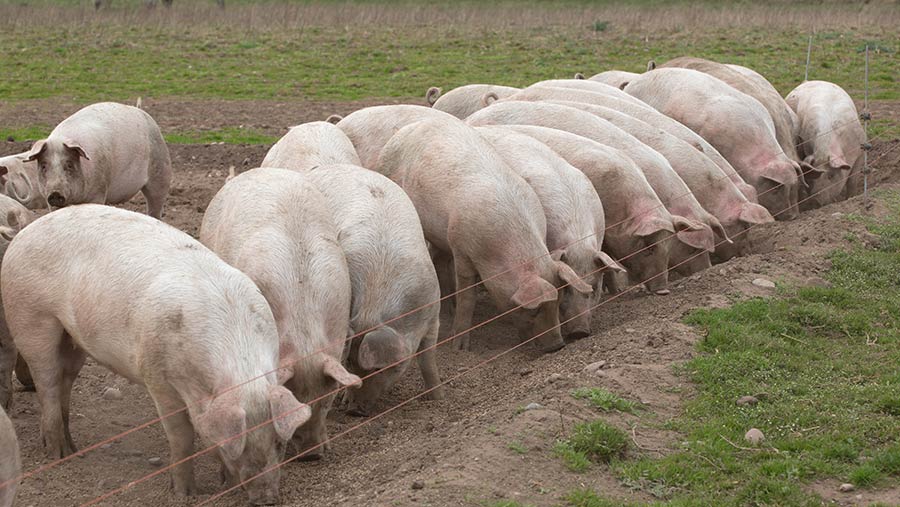 Pig prices have dropped in the past week to the lowest levels since February 2019.

The EU-spec standard pig price (SPP) dropped by 1.27p/kg on week-earlier levels to 137.49p/kg for the week ending 19 February, according to the AHDB.

Average pig weights for the SPP sample have reached 95.04kg, an increase of 4.69kg on the same time last year. This has been driven by increases in the number of heavier pigs coming forward due to ongoing backlogs.

On-farm feed costs have also been rising, putting further pressure on the sector. May 2022 UK feed wheat futures stood at £231/t on 28 February.

Pig consultant and valuer Peter Crichton said: “Producer prices will need to be well above 200p/kg if feed costs remain at their current levels before the pig meat supply chain is back on the rails.”

Despite these low prices, there are reports from industry that may offer some hope for the troubled pig sector, both in the UK and on the continent.

Defra has updated its slaughter incentive payments scheme to allow processors to sell pork into the domestic market from the extra kills that are carried out.

Nick Allen, chief executive of the British Meat Processors Association (BMPA), said: “It’s important to understand that this scheme, which helps toward the cost of slaughtering out of hours, does not cover the whole cost, and is not the only factor in deciding to run a plant for longer hours.

“Finding a suitable market for the pork in a very competitive marketplace at the moment is a big challenge, and employers also need to factor in the welfare of the staff when commissioning extra hours. Nevertheless, the changes are welcome and appreciated, and will help.”

Pig prices on the continent are beginning to show early signs of optimism.

Peter Crichton said in his weekly report: “Trade sources are indicating that the main reason why the German pig and cull sow price rises have occurred is because slaughtering throughputs have now largely recovered, with Covid less of a problem than it has been.

“This comes at a time when, unsurprisingly, pig numbers are also beginning to dwindle, reflecting the large number of sows which have been culled throughout much of Europe over the past twelve months or so.”

Scottish pig producer Scotlean also reported that supplies of pigs in Denmark, Spain, Holland and Germany were all beginning to tighten, following on from the increased culling of sows in some EU countries last year.