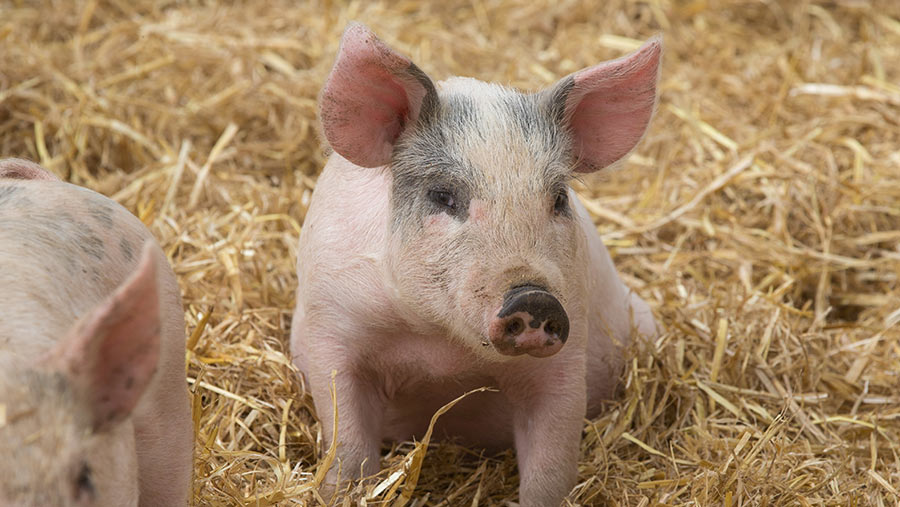 That rise means prices are now 13.38p/kg higher than the same week last year, and 13.02p/kg above the five-year average.

“All weight bands recorded price increases, ranging from just under half a penny to just over a penny,” said AHDB analyst Jennie Tanner.

For the first time this year, average carcass weights fell below 2018 levels.

“Reports suggest that demand [for 7kg weaners] is limited as a lack of fattening space continues to influence the market,” said Ms Tanner.

AHDB Pork analyst Bethan Wilkin said the lack of a space has been blamed anecdotally on a logjam in the system.

“This could be due to producers keeping pigs longer and finishing them at higher weights. It may also be down to an increase in breeding sow numbers,” Ms Wilkin suggested.

Meanwhile, prices for heavier weaners have continued to rise, averaging £57.02 a head. This is the highest price for this category since late 2017, the AHDB data shows.

The upward trend in finished pig prices is being fuelled by China’s ASF-hit pork market, which has devastated supply.

In China, by the week ended 23 October, pig prices had broken through the 400p/kg mark, while wholesale pork averaged 621p/kg.

These prices are more than twice as high as last year’s levels, the AHDB said.

A report by international financial services provider Rabobank has suggested that the ASF crisis will affect China’s production for longer than previously thought.

Initially, projections showed the reduction in China’s pig herd would continue into 2020.

Now though, Rabobank has suggested production will not stabilise until at least 2025, due to the time needed to rebuild the national herd.

The bank’s analysts said China’s pig herd had contracted more than 430 million animals in August 2018, to fewer than 200 million pigs, to date.

The report said the focus up to 2021 would be on small-scale restocking and large-scale importing.

But it added China would be unable to import enough pork to make up for the production shortfall in the coming years, causing high global prices and prompting consumers to change habits.