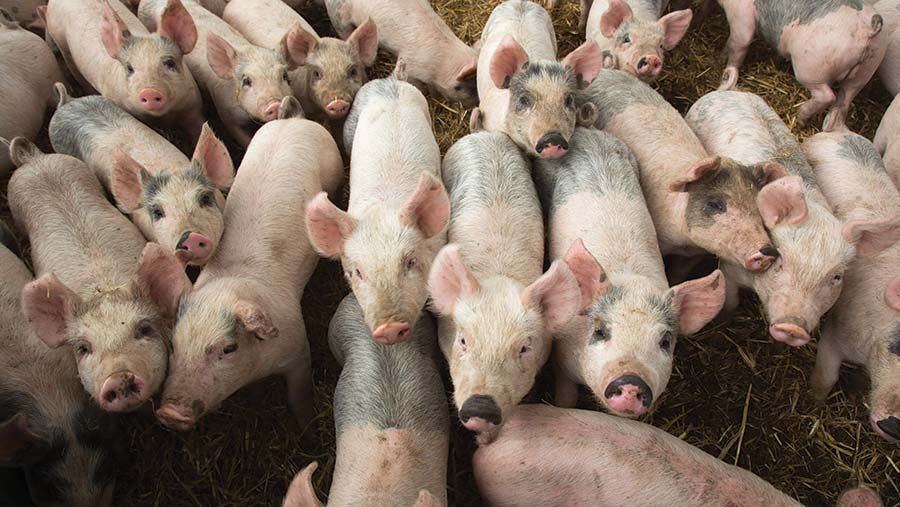 Pig prices have risen for the 12th week in a row and the trend is set to continue. However, soaring feed costs and a shortage of labour persist to dog the sector.

The increase puts prices 6.47p/kg above the five-year average but they are still 9.42p/kg short of levels a year ago.  Average carcass weights showed no change on the week at 86.46kg, which is 2kg heavier than a year ago.

Independent consultant and market analyst Peter Crichton said prices should continue to rise in the coming weeks, bolstered by firm values in Europe and strong demand.

Oversupply caused by Brexit, the Covid-19 pandemic and African swine fever in Germany has been dealt with, while demand for pigmeat has increased.

Shoppers are turning to pork as a more cost-effective alternative to high-priced beef and lamb during barbecue season, Mr Crichton said.

However, prices remain well below costs of production, ruling out profits for most units, he added.

Mr Crichton suggested that average costs per kilo of meat produced stood at about 165-170p/kg, driven up by high feed wheat futures values of £200/tonne for July.

The high costs are starting to deter finishers from the market. Those who operate on a B&B basis are refraining from buying weaners because they can’t see a way to make a profit, Mr Crichton said.

He pointed to falling prices for 7kg weaners, which averaged £37.74/head – down £4.79/head on the price achieved for the same week a year ago.

A further difficulty emerging is a lack of labour due to Brexit.

“Many eastern Europeans have gone home already, and replacing them on farms, at processors and in the haulage sector is proving difficult,” Mr Crichton said.

He speculated that processors may return to short working weeks if the shortage – put at about 10-12% by the British Meat Processors Association – is not quickly addressed.

On farms, the lack of labour is acting as a further deterrent to production for the would-be B&B finishers and another major reason for the weaner price decline.