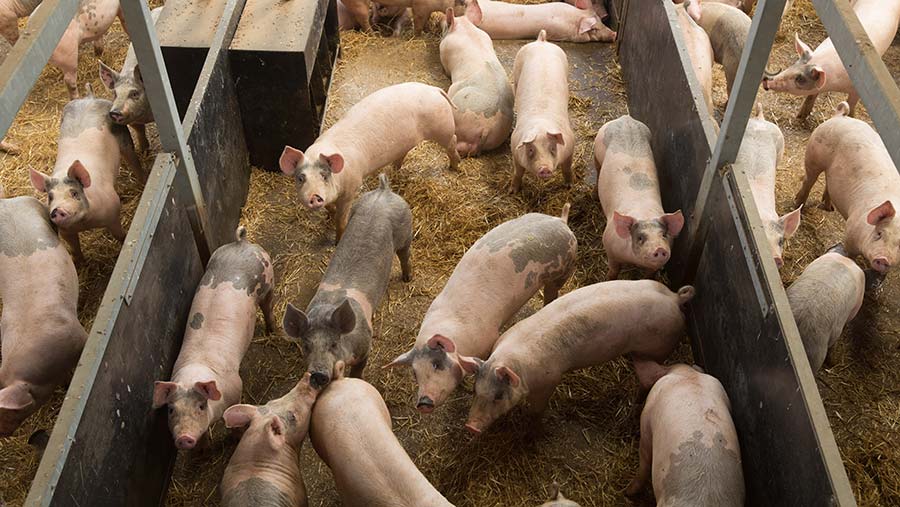 The latest estimates put average pig production costs at 150p/kg for April to June, just 1p behind the EU-spec Average Pigs Price for the quarter, according to AHDB Pork.

The rising cost of feed as a result this summer’s drought has pushed up production costs by 9p/kg compared with the the same quarter last year, while pig prices have fallen by 12p/kg over the same period.

See also: 5 steps to reduce antibiotics use in your pig herd

Despite prices picking up by 2p/kg compared with the first quarter of 2018, a 5p/kg increase in production costs has more than wiped out any benefit to producers’ bottom lines.

Feed accounts for about 60% of pig production costs, with higher finishing feed costs in this quarter making a particular difference.

As a result, many producers have chosen not to use as much finishing feed in the 12 months to June 2018, with the knock-on effect being lower daily liveweight gains, according to the levy board.

The latest Agrosoft (pig software) data for the 12 months to June this year shows that feeder pigs have been fed more and taken to higher weights, leading to a longer spell in the rearing unit.

These longer times have led to a reduction in the number of pigs that can pass through a unit in a year, further increasing costs per pig.

As a consequence, the average daily liveweight gain and feed conversion ratio for the UK rearing herd have both worsened.

These factors, combined with a high post-weaning mortality rate as a result of the prolonged wet winter, have put a further burden on production costs.

Feed prices are expected to continue to rise, making it less likely that the average business will stay in the black.

The levy board did not anticipate any major gains in the pig price as global production levels have marched upwards.

Producers can expect losses in the coming months as margins are already so narrow, according to AHDB Pork, but it stresses that this comes on the back of almost 60% of operators being profitable over the past decade.