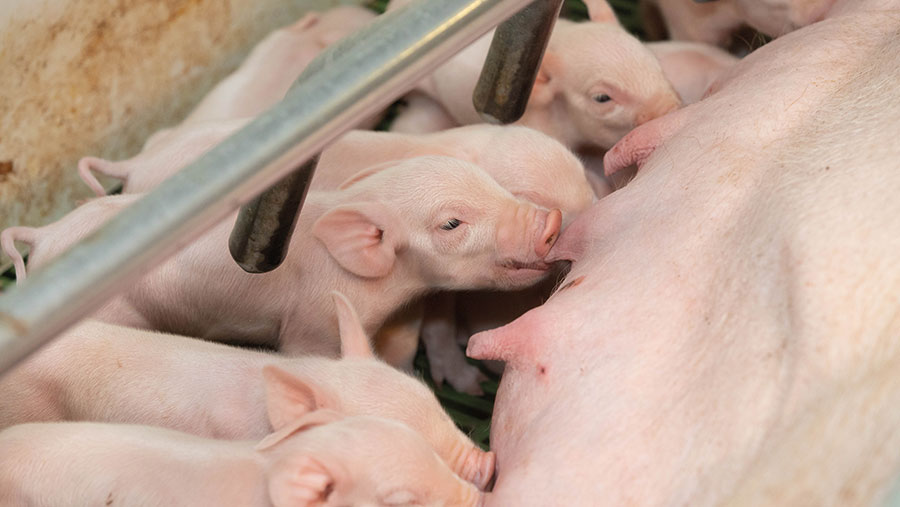 Pork prices have edged lower amid concerns that too many finished pigs are coming to market during a period of weak demand.

The EU-spec standard pig price for the week ending 22 August stood at 162.72p/kg, down from 164.68p/kg at the beginning of the month but still about 10p/kg higher than year-earlier levels.

High abattoir throughputs are contributing to the price fall, with the estimated weekly slaughter last week hitting its highest level since March, according to the AHDB.

See also: How realistic is free-farrowing for the UK pig industry?

Total pigmeat production in July was at its highest level for 20 years, the levy board said, with abattoirs producing more than 860,000t of product in the month, some 9% more than in July 2019.

Pig marketing co-operative Scotlean said there could be difficult times ahead with demand remaining weak and a glut of pigs likely to remain in the system for some weeks.

Stuart Ashworth, director of economic services at Scottish levy board QMS, said despite pork prices being 7% higher than a year ago, the sector had seen the weakest uplift among all of the red meats.

Prime cattle prices were currently 13% higher than a year ago and lamb prices around 18% higher, he noted, but UK producers continued to enjoy prices well above pig farmers in the EU and US.

“Across Europe pig prices are typically 14% lower than a year ago, leaving the UK with one of the strongest farmgate prices in Europe,” said Mr Ashworth.

“US prices are being badly affected by disruption to slaughter capacity earlier in the year and some ongoing expansion in the US sow herd. Slaughterings are currently around 3% higher than a year ago and farmgate prices 40% lower.

“Despite the UK price being well above European prices, imports to the UK from the EU are much lower this year than last, which, despite growth in domestic production, will be offering support to UK producer prices.”

The UK is about 66% self-sufficient in pigmeat and imports mainly from the EU to meet demand, meaning some non-UK product will always be sold here.

However, the latest AHDB Porkwatch survey of the proportion of British product sold in supermarkets has revealed supplies of homebred products are edging up.

More than half of bacon (53%) on supermarket shelves is now home-produced, up from 46% 12 months earlier, while the proportion of British ham now stands at 72%, up from 65%.

Global pork markets are continuing to be underpinned by China’s enormous imports of the product to compensate for the loss of its domestic herd to African swine fever (ASF).

The country hit a monthly record import volume in July of 430,000t, according to news agency Reuters.

This surpassed the previous record of 400,000t which it had set only a month earlier.

Imports from January to July stood at 2.56m tonnes, up from 1m tonnes over the same period in 2019.

Culling to fight the disease has wiped out half of the country’s sow herd, some 200 million animals, with recovery likely to take until at least 2023.