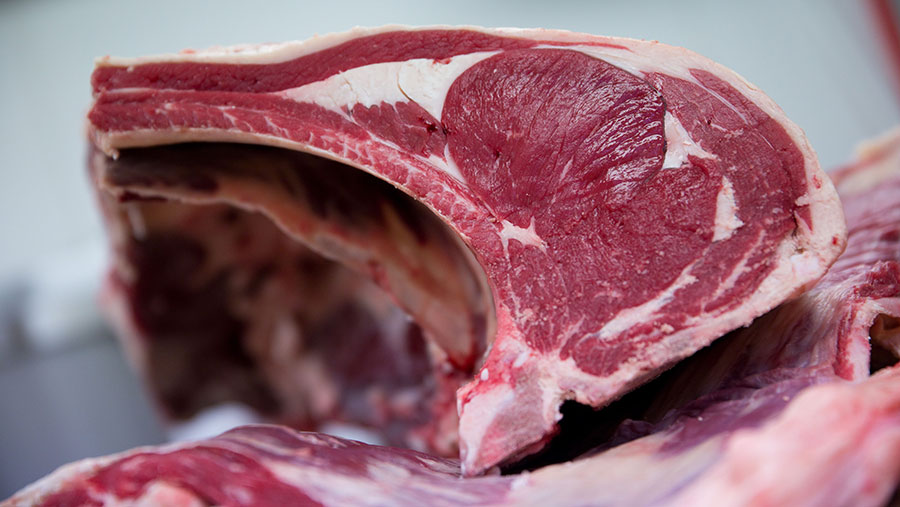 Prime beef prices have risen amid tightening UK supplies and a good export trade, according to AHDB figures.

All prime average prices rose by 1.4p to settle at 333.3p/kg in the week ending 8 February.

The main driver was R4L steer prices, which were up 2.4p on the week, said AHDB Beef and Lamb analyst Hannah Clarke.

However, cull cow prices remained relatively flat, up 0.4p on the week to average 230.5p/kg, with reports suggesting good trade.

Irish processors have switched product away from the UK market to meet China’s demand, reducing supply in the UK, he said.

Tightening supply of prime beef since Christmas also has its roots in decisions taken by cattle farmers two years ago, Mr Vile suggested.

Concerns over the spread of TB back then saw a fall-off in calf registrations and that is now coming through to limit supplies.

“We saw a significant drop in throughput of 3,585 head in Ireland and we are waiting to see whether this is a blip.

“It may be due to the Irish elections or currency fluctuation that has temporarily seen farmers hold cattle back.”

Looking ahead, Mr Vile said processor decisions would be key to prices in the coming two weeks.

He explained that with tighter supplies, processors might cut back on the number of kill days for beef.

This would have the effect of restricting weekly demand and holding the price back.

Alternatively, if kill days are maintained, processors will have to go looking for supply to keep throughput numbers up. In that case we may see further firming of prices in the weeks ahead, he suggested.