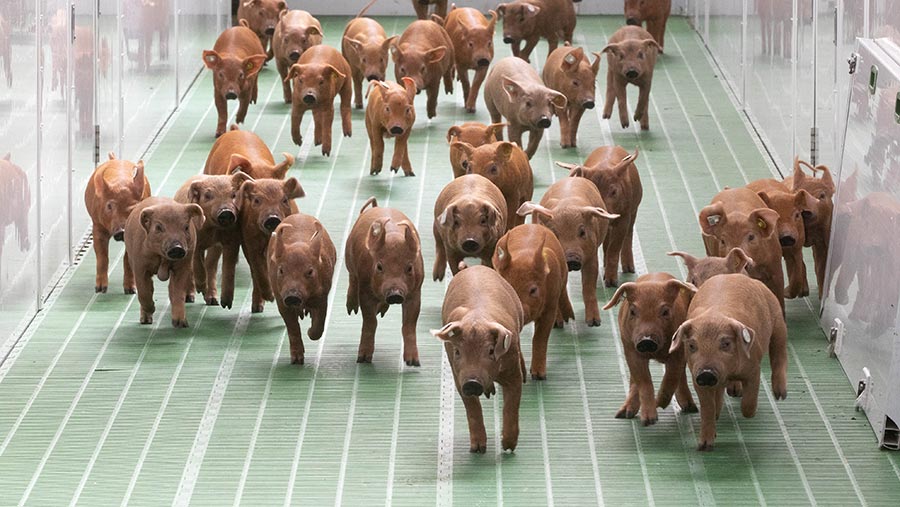 According to the AHDB, the average finished pig producer lost £26 a head in the first quarter of 2021. Just 12 months earlier, net margins were £40 a head higher at £14 a head.

The dramatic fall has seen the sector contract by 12,000 breeding sows, according to National Pig Association (NPA) estimates.

While most cost areas have remained stable throughout the past 12 months, feed costs have soared. In January to March last year, feed costs accounted for about 61% of all outgoings, the equivalent of 90p/kg deadweight.

AHDB figures based on a mix of wheat, barley, soya bean and rapeseed, showed concentrate prices rose quickly through the quarter.

The main drivers has been rising global demand for wheat, maize and soya beans. This was mainly fuelled by China which was ramping up poultry production and attempting to restock its pig herd in its ongoing battle with African swine fever (ASF).

The country’s soya imports are expected to exceed previous records of more than 100m tonnes while wheat imports hit 25-year highs in February.

The high feed costs, combined with a sharp fall in prices over the second half of 2020, resulting in the record losses.

Prices peaked at 165p/kg for APP-spec pigs in the summer of last year before dropping below the 140p/kg mark during the first quarter of 2021.

Prices were driven down as the market went into huge oversupply following China’s bans on UK and German pigmeat exports.

British processors had export licences removed because of perceived risks of Covid-19 infection while German pigmeat was banned following the discovery of African swine fever cases in wild boar.

Throughput dwindled at abattoirs as processors struggled to cope with Covid-19 outbreaks and restrictions on staffing levels to comply with Covid-19 precautions. The result was a backlog of 100,000 pigs on farm awaiting slaughter.

At the same time, Brussels imposed rigid constraints on UK produce, and immediately post-Brexit exports of certain pigmeat products all but ceased.

With supplies mounting and prices sliding in Europe, the situation was made worse by the UK’s open-door policy for EU products. It allowed in cheap pigmeat, undermining UK values which plunged.

NPA chief executive Zoe Davies said that although oversupply issues had been tackled and pig prices had started to rise, the devastating impact of the first three months of 2021 would continue to hold back the sector for the long term.

It had left a huge hole in finances that had damaged UK pig producer competitiveness and led to increased borrowing, Dr Davies said.

Many pig farmers had been forced to quit, causing the loss of 12,000 breeding sows over the three months. Other farm businesses were holding on only through increased debts.

Dr Davies said a survey of NPA members had revealed that 70% of British pig farmers had sunk into increased debt, through overdrafts, mortgage extensions, loans and extended credit.

The NPA is continuing to press for government support totalling £3.2m.

The figure is calculated from a total of punishing discounts imposed by processors as pigs went overweight and out of spec during the backlog caused by Covid-19 and Brexit.

The penalties amounted to more than £50 a head in some cases.