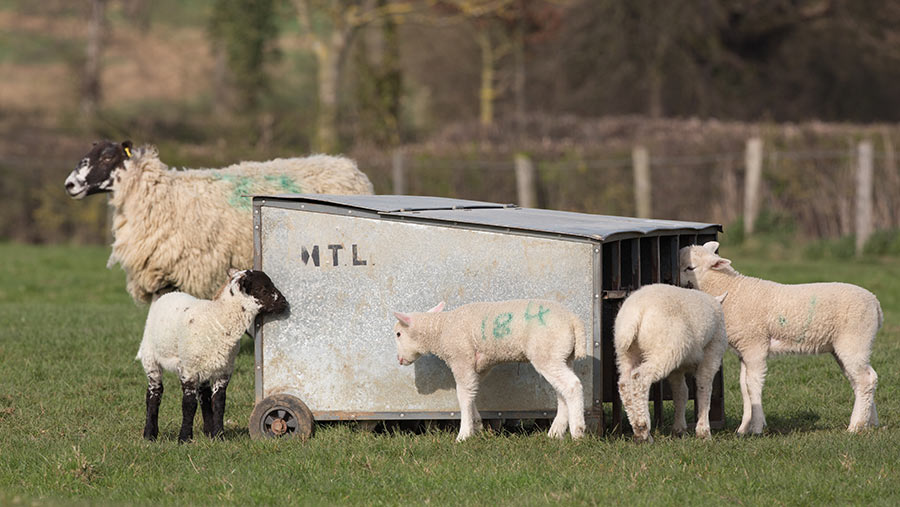 Liveweight lamb prices have risen again, with new season (NSL) values more than £1/kg higher than the same time a year ago.

Throughputs at British auction markets for the week totalled 100,300 head. Numbers were up 10,800 head (12%) on the week as the NSL crop starts to come forward in the southern half of Britain.

AHDB analyst Charlie Reeve said the NSL crop was earlier this year and accounted for 30% of total auction market throughputs in the past week.

This is likely to be due to the high prices that have encouraged flock keepers to finish earlier, Mr Reeve said. Processors are also keen to source NSL with lower numbers of old season lambs available.

The season is well behind the South as usual, but the few early-born lambs were helped by the unusually dry conditions earlier in the spring. These are 10 to 14 days ahead compared with an average year, Mr Williams said.

But the main crop of lambs has been hit by the recent freezing weather and so the bulk of supply has been held back. It means buyers are anxiously sourcing any OLS stock and snapping up the early few NSL available, Mr Williams suggested.

Looking ahead, the picture is for a very strong market, with above average prices possibly through to end of July, Mr Williams said.

Elsewhere, the deadweight market has dropped back. For the week ending 1 May, GB deadweight OSL SQQ averaged 644.3p/kg, down 29.9p/kg on week earlier levels as quality issues emerge in some consignments.

But prices remain high, at 171p/kg up on the same week of the previous year and 181p/kg higher than the five-year average.

The GB deadweight NSL SQQ averaged 685.8p/kg, down 0.8p on the previous week. Total throughputs for the week ending 1 May are estimated at 129,200 head, down 39% on the same week a year ago, AHDB figures showed.

This is partly due to the bank holiday reducing killing days for some abattoirs.

Although the total volume of German sheep meat imports has been relatively stable in recent years, the UK’s market share has been growing.

Over the past five years the value of GB exports to Germany has doubled, to exceed £80m in 2020.

Despite German import data post-Brexit showing an 85% decrease in volumes coming from the UK, there may be longer-term prospects to supply a strong export market.

German deadweight prices in the week ending 2 May averaged over £7/kg, an increase of 165p/kg on the same week last year, Mr Reeve said.

Prices have been surging among other European member states in recent weeks, potentially providing opportunities for GB lamb exports in the near future, Mr Reeve added.