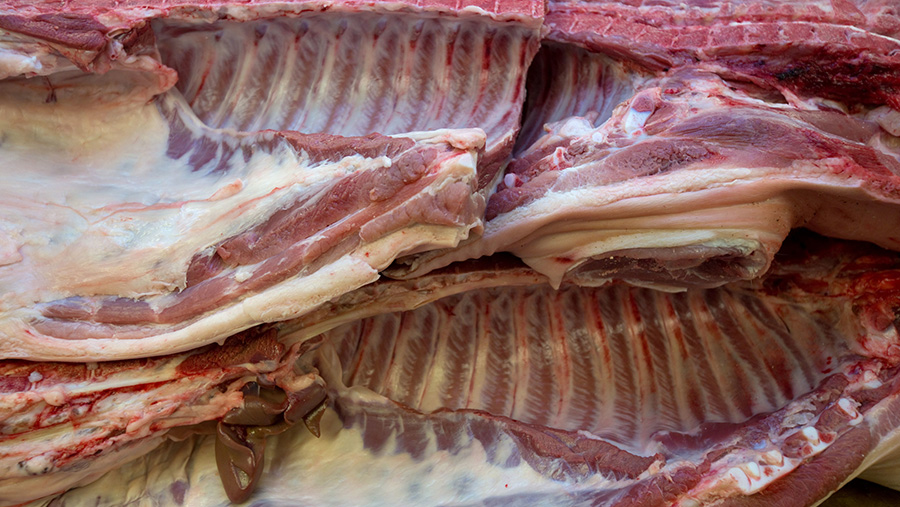 Some of the main pig-producing and exporting countries have seen startling price rises in recent weeks as China’s African Swine Fever crisis deepens, with prices in the US (Iowa-Minnesota weighted average) rising 72% between late February and 18 April.

In the same period, Canadian prices rose 43%, Spanish prices by 22% and French prices by more than 17%, while the UK average put on less than 1%.

See also: The options for getting into pig farming

The latest figures from AHDB show the EU-spec SPP reached 138.67p/kg in the week ended 20 April , up just 0.36p on the previous week. Since the start of March, the SPP has risen by 1.24p/kg and remains 6.6p/kg below year earlier levels.

Larger processors raised their prices by 1-3p/kg last week and although it accounts for only a fraction of trade, the spot market has been a good 10-14p/kg ahead of the SPP and weaners are in short supply.

The NPA said it had been collecting contract information which is shedding interesting light on the situation and was certain to be of interest to bodies like the Groceries Code Adjudicator (GCA).

The AHDB is expecting an imminent rise in demand for UK pork, partly due to the sharp rise in EU pork prices.

High stored pigmeat stocks in anticipation of the UK’s expected 29 March departure from the EU have been blamed for putting downward pressure on prices, alongside high throughputs in recent weeks following difficulties with factory breakdowns.

A short kill week in the latest period, due to the Easter break, may have also had a negative impact on demand, said AHDB Pork.

“At a time when they really needed support from processors, they are not getting it.

“The excuse that we are hearing about stockpiling is contrary to what retailers are telling us and will only hold for so long. I believe what we are looking at here is a deliberate attempt to delay the inevitable.”

“Forward quotes for imported loins are showing a 20% increase in price, so the fairy stories we are being sold just don’t add up in my view.

“I’m more than happy to be re-educated should processors feel the need to share, but what is clear is that without some very sensible explanation and soon, the GCA may well be getting a call,” said Ms Davies.