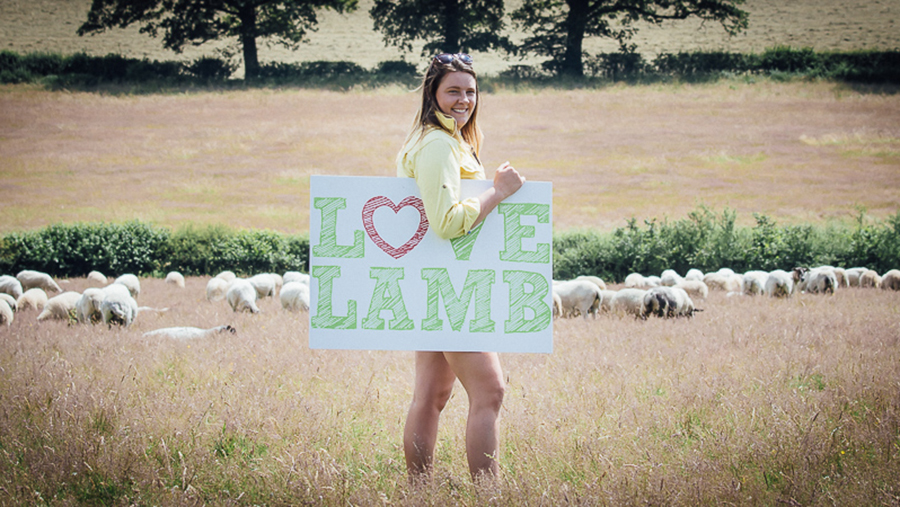 Charlie Beaty, 24, works at her family’s mixed tenant farm in Meriden, near Coventry, in the West Midlands.

The arable, beef and sheep enterprise has a flock of 300 breeding ewes, most of which are North Country Mules which are farmed to fit around the arable and cattle work.

The ewes and lambs Ms Beaty looks after are grazed over 80ha of permanent pasture, alongside 20-30 cows and 30-40 beef stores. The pasture receives minimal input and the majority of the lambs are finished on grass.

She said: “We produce our sheep on permanent pasture, which helps to absorb carbon from the atmosphere and produces quality feed to give our lamb its delicious flavour.

“I hope farmers across the country will get involved in Love Lamb Week and inspire more people to put it on their plates.

“Not only does it taste great, it’s also a nutritious meat which is naturally rich in protein and provides vitamins which are good for health and wellbeing.”

This year’s campaign, which has £1.4m marketing support from the Agriculture and Horticulture Development Board (AHDB), will run from 1 to 7 September, at a time when British lamb is in peak supply.

Producers, butchers, retailers and restaurants are all being urged to save the date and join the celebration.

The phrase “Lambs hits you in the chops” will be used in promotional videos, recipes and adverts to encourage more people to back British sheep farmers by buying more British lamb.

NSA chief executive Phil Stocker said: “As well as being packed full of flavour, eating extensively reared grass-based lamb which is produced nationally, regionally, and locally is much better for the environment than any artificial supplements which are appearing on our supermarket shelves.”

For more information on Love Lamb Week visit ahdb.org.uk/lovelambweek. During the week, show your support and share posts on social media using the hashtags #LoveLamb and #LoveLambWeek