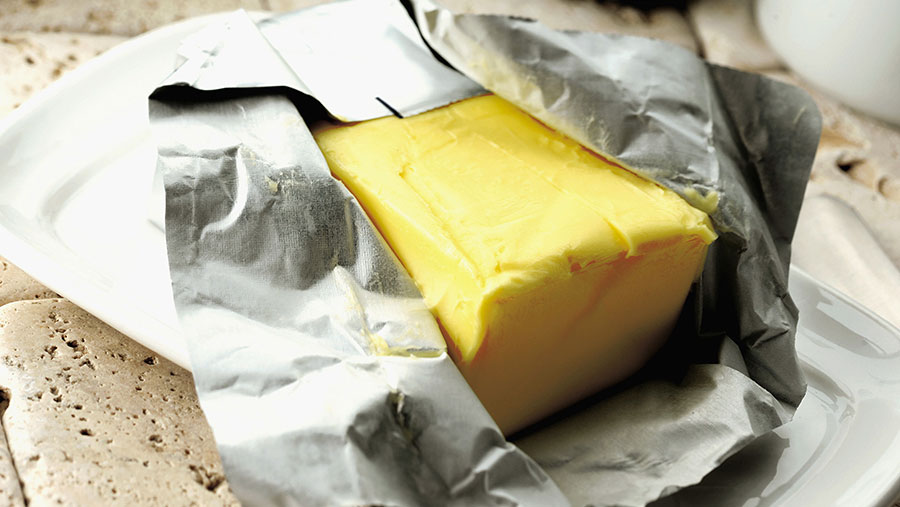 This was despite August traditionally being a quiet month for wholesale market trade.

The average UK butter wholesale price jumped 13% in August to £6,150/t, 89% higher than the same month last year and a whopping 232% higher than when prices began their upward trajectory in March 2016.

UK wholesale bulk cream prices enjoyed a similar increase, rising by 14% in August to average £2,850/t – almost double the value recorded 12 months earlier and three and half times higher than 18 months ago.

Skim milk powder witnessed its second consecutive fall to average £1,550/t, but was just 1% behind August last year as a result of low trade and demand levels, as well as unfavourable exchange rates.

These unprecedentedly high fat prices were being driven by rising global demand for butter, according to AHDB dairy senior analyst, Chris Gooderham.

“I’ve been in the industry for 22 years and I’ve never seen fat prices at these levels,” he said.

“Butter consumption is growing globally – particularly in the Far East, and there’s not enough supply to meet this demand.”

In the shorter term, recent heatwaves across Europe had increased the consumption of ice cream, further compounding butterfat shortages and pushing prices upwards.

“We’re also seeing consumers coming back to enjoy butter as negative health claims around it have been reversed, as well as the effects of UK exchange rates.”

Mr Gooderham said that prices would continue to increase as long as demand continued.

“We’ve not seen these higher prices flow to consumers yet.

“Current butter retail prices are not equivalent to £6,000/t but at some point, they will have to translate to shoppers and we don’t know how they will react to this.”

He added that high fat prices could encourage food manufacturers to decide to move away from using butter – but said this was unlikely due to the implications for existing packaging and nutritional information.