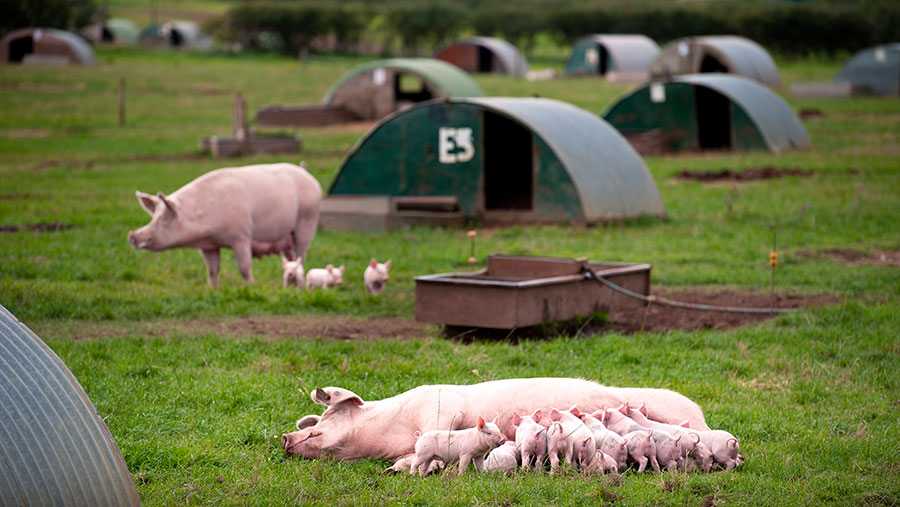 The pig sector figure is part of Defra’s farm business incomes forecast, which provides estimates for all farm types in the 12 months to February 2020.

It suggested that pork prices were driven up by China’s production losses due to African swine fever (ASF), which created extra demand.

Prices are up by about 5% compared with 2018-19 due to the ASF outbreak in Asia and eastern Europe.

What is farm business income?

For non-corporate businesses, farm business income represents the financial return to all unpaid labour (farmers and spouses, non-principal partners and their spouses and family workers) and on all their capital invested in the farm business, including land and buildings.

For corporate businesses it represents the financial return on the shareholders’ capital invested in the farm business.

Returns were also up on the back of higher throughput and carcass weights, and a 4% fall in feed costs.

With specialist pig businesses outperforming all other sectors, the National Pig Association has urged caution when viewing the figures.

“As ASF continues to spread towards Germany, we are extremely cautious about future prices,” said Dr Davies.

An outbreak in Germany will see exports to China blocked and its output returned to the EU market, which will increase supply and pressure prices. The UK’s valuable cull sow market in Germany may well collapse.

Meanwhile at home, domestic demand is still a struggle. “These figures suggest a period of making hay while the sun shines, but continuing to invest and ensure pig businesses are resilient and competitive for the future,” she said.

For other sectors, the weather was a key driver for change during 2019 compared with year-earlier results.

But arable farms have reported falls in income with the value of higher yields offset by lower prices and a hike in machinery costs.

Average income on lowland cattle and sheep farms is expected to have increased by 51% to £19,000. Defra suggested the additional margin was mainly due to lower feed costs.

In addition, total output for cattle increased by about 3%, helped by slightly heavier carcass weights. The improved incomes were achieved despite lower prices for most of the period covered.

Defra has predicted a 40% increase in average incomes for LFA livestock to £22,000, driven by lower feed costs and an increase in sheep output.

The same factors pushed up LFA cattle output with feed costs reckoned to be 20% down.

Specialist cereal crop growers saw the biggest drop in incomes across the farm sectors. Defra’s estimate suggested that average income on cereal farms dropped by 15% to £57,000 in 2019-20.

The main factor was the weather which saw bumper yields and increased crop areas planted compared with 2018. These plentiful supplies and a successful harvest pointed to a 4% price drop.

At the same time, input costs are expected to have risen by 2%, with higher fertiliser and machinery prices the big drivers.

Average incomes on general cropping farms are expected to show a fall of about 7% to £99,000 in 2019-20. Peas, beans, sugar beet and potatoes all saw increased yields compared with the drought-stricken harvest of 2018.

But, like cereals, the effect of the rises, coupled with increased areas for some crops, are expected to be offset by lower prices.

The exception to this is oilseed rape, where prices are predicted to remain firm, but the area and yield decreases, reflected losses to cabbage stem flea beetle and pigeon grazing.

In the dairy sector, Defra estimated incomes to have remained static at about £80,000.

A fall in input costs was offset by a similar reduction in output, with prices for the period March 2019 to January 2020 about 1% lower than the previous year.