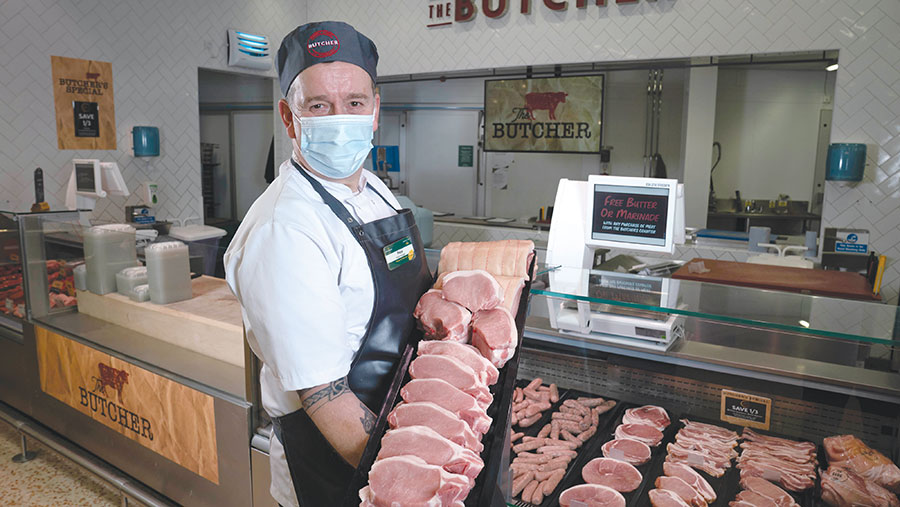 Retailer Morrisons has slashed pork prices on its supermarket shelves in a bid to boost demand and reduce the backlog of pigs on British farms.

The National Pig Association (NPA) has estimated that more than 100,000 pigs are stuck on holdings across the UK due to the effects of the Covid-19 pandemic, low import prices and Brexit issues.

Staffing levels at British abattoirs have been reduced by Covid-19 and related changes to  working practices. The pandemic has also seen China ban imports of pigmeat from processing plants that have been hit.

See also: A guide to applying nitrogen on grassland early in the season

Dropping retail prices to stimulate demand was one of the issues discussed at the pig supply chain round table organised by the NPA earlier this month.

Morrisons is the only retailer to have responded and will cut some product prices by more than half for a 10-week period.

The retailer was confident it could meet demand, despite the continuing pressure on abattoir staffing, caused by Covid-19 measures.

A spokesman for Morrisons said: “We process everything going into Morrisons ourselves, so we are very conscious of the pressures in the whole system. By working with our livestock buyers and processing teams, and by helping to create customer demand for pork, we are hoping to help sell the large amounts of stock currently in the system.”

Dr Davies said selling more British pork on the domestic market was one of the key ways to reduce the excess of pigs.

“This is an extremely important move and will help to reduce the backlog of pigs on farms.”

But she stressed there was still more the wider supply chain could do.

“The spotlight remains fully on the sector over issues such as processors establishing Saturday shifts to help tackle the backlog. Working with the Chinese authorities to assure them the Covid-19 measures in our processing sites are robust is still a top priority,” she added.

Reopening exports to China would be a major step to getting through the logjam.

The AHDB has reported a slight uplift in cull sow prices in Germany, providing a glimmer of hope for UK producers, which has traditionally supplied the market.

Prices slumped to about €0.78/kg (67p/kg deadweight at current exchange rate) in December after China imposed a ban on German exports due to concerns over African swine fever cases identified in wild boar.

Germany had been a hugely significant market for British cull sows, worth £60m/year at peak prices.

Once the import ban was imposed, Germany turned to its home-grown product and that, combined with post-Brexit export difficulties, added to plummeting prices in the UK and helped fuel the backlog of pigs on farm.

The price rises are likely due to falling numbers of sows, both in the German and Dutch herds.

Slaughter levels of cows have been high in both countries. The AHDB also speculated that signs of increasing demand for pork were behind the small rise in prices.