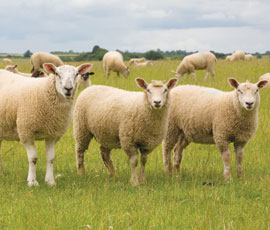 New costings from EBLEX show that despite some dramatic improvements on the previous year’s results, most cattle and sheep producers made a net loss in the year ending 31 March 2012.

Its Business Pointers 2012 results demonstrate the effect of higher costs and poor weather across a wide range of enterprises. All 120 suckler herds in the costings series made a net loss after accounting for all costs, including unpaid family labour, interest and the rental value of owned land. Combined rearer-finisher herds also lost money.

While top-third extensive cattle finishers made a net margin of £165 a head, the average in this group lost £100 a head, despite the boom in beef prices.

However, the 31 intensive cattle-finishing enterprises costed all made a positive net margin averaging £16 a head, with the top third making £106 a head, compared with a loss of £37 the previous year.

In almost all of the sheep systems costed, the top-third performers made a profit, but the average all made a loss. The exception was in store lamb finishing, where average performers made a net margin of £3.48 a head, but this was a fall from £7.47 a head in the previous season.

EBLEX is urging producers to examine fixed costs, which it said were key to efficient beef and sheep production. The annual benchmarking report shows that top-third producers across all types of English beef and sheep enterprise spent significantly less on fixed costs than those in the bottom third.

This was particularly evident in lowland sheep flocks, but the effect was not so significant in LFA sheep flocks, where top-third producers spent about 30% less on fixed costs compared to the bottom third.

Top-third lowland suckler herd producers’ fixed costs were less than half those of bottom-third producers, while top-third LFA suckler herds spent nearly 60% less than those in the bottom third.

It was also important to pay attention to many areas that would improve financial performance, said Clive Brown, EBLEX senior manager for the northern region. These included fertility, growth rates, better genetics, identifying the right market and selecting to meet that market. Farms that performed well were those that identified potential issues early on and took action.

The challenges of getting through winter with widely varying forage quality meant it was crucial to know forage analyses to avoid poor performance or even overspending on supplementary feeds when forage quality was good, said Mr Brown.

There were also still some farms where the choice of stock or system was wrong, either because of personal preference or because these had not been questioned.