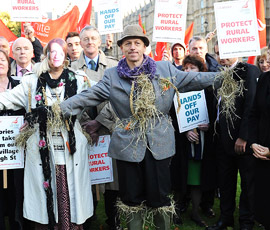 MPs have voted to abolish the Agricultural Wages Board, despite a last-ditch attempt by campaigners to save the body.

Farm workers, Labour ministers and workers’ union Unite had led a protest to take the AWB out of the Public Bodies Bill, which plans to abolish number of quangos.

But during a vote in the House of Commons on Tuesday (25 October), MPs decided to vote against an amendment to save the board by a majority of 77.

Earlier in the day farm workers had dressed as scarecrows outside Westminster in a bid to convince MPs to support the board, which sets the wages of about 150,000 workers.

About 30 farm workers carried flags and placards as they argued their pay and conditions would be hit, while cuts in wages would deter young people from entering the industry.

Speaking in the Commons, shadow food and farming minister Huw Irranca-Davies said the axing of the AWB would have “severe repercussions”.

But farm minister Jim Paice said the AWB needed reform 63 years after it was set up.

“Back in 1948 there were hundreds of thousands of farm workers,” he said.

“Most of them were horsemen because that was the main force of traction.

“The world has moved on. It is not the forelock-tugging yokel that so many (Labour) members seem to want to think is still a farm worker.”

He said the market should be allowed to decide wages as in other industries, but insisted the AWB’s abolition was not a “secretive plot” by the government to drive down wages or conditions.

• What do you think of the decision? Have your say in our forum