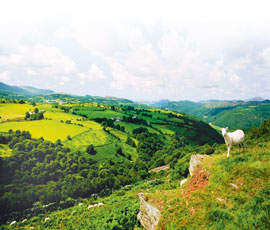 For months farmers in Wales tried to get to grips with the complexity of the new Glastir farmland management scheme. Many fell at the first hurdle – either the scheme offered a poor return for their environmental commitment or their farming systems failed to attract sufficient points to gain entry in the first place.

But there is now an opportunity for a rethink because Wales’ rural affairs minister, Elin Jones, has accepted the majority of recommendations made by an independent review panel.

The minister set up the panel when it became obvious that Glastir was unattractive to farmers. Less than 3000 applied to join.

She made it clear that she didn’t want the panel to review the principles and environmental outcomes of Glastir but to make recommendations to make it more attractive to the farming community.

It seems to have achieved this aim, with a list of 15 main recommendations incorporating 61 detailed actions.

Whether Elin Jones has been generous in her response – accepting some recommendations while rejecting others – remains to be seen. The farming unions have given her reaction a lukewarm response, but the proof lays in the future uptake of Glastir by farmers.

One of the most significant changes that could emerge is to payment levels. The panel wanted the costings for each option to be urgently reviewed using up-to-date financial statistics. This recommendation was made because gross margins have gone up in the period since Glastir was set up and costs have risen too.

The minister accepts this must be done but, because any such change would have to be approved by the European Commission, payments would remain as they are until at least 2013. Also under scrutiny will be the level of additional payment for farms in Less Favoured Areas.

The application window will be longer than the 2010 window and it will fall as close as possible to the start date of the contract to allow for accurate information to be incorporated.

More will be done to publicise Glastir alongside helplines and a “Frequently Asked Questions” facility. And the duplication of information requests will be avoided by the assembly government working with statutory organisations.

One area of confusion, the relationship between Glastir and other on-going environmental schemes and agreements, will be addressed by having these clearly explained to farmers.

And there will be more information on the distinction between habitat and improved land. Farmers will get clearer explanations of how the points system reimburses them for capital items over the full agreement period.

The review panel thought the provision of maps to support the application process was a significant weakness in the 2010 application window, so in future the best available boundary maps, those used for Single Application Form (SAF) purposes, will be made available.

An important change is that the number of points needed per hectare to enter the scheme has been halved to 14, but payment for this entry level will be limited to 50% of the full payment.

There will also be a new approach to the organic scheme. In future, organic farmers must achieve 100% points to meet their All Wales Element contract – not the 50% currently in place. But the assembly government will look at whether an organic maintenance fund could be delivered within Glastir.

The review group had considered the uptake and popularity of the existing 40 options and how these could be made more flexible. The group felt the scheme should consider farmers’ concerns about loss of forage area, particularly on their best-improved land. The existing 3m hedgerow creation options could have been replaced with 2m options, but for livestock farms vulnerable to bovine TB breakdowns the current 3m matches the animal health recommendations. Different sub-categories will, therefore, be introduced so that farmers can choose what best suits their farm businesses.

Although there had been some criticism that 40 options had made Glastir too complicated, the group did not think any of the existing options needed to be withdrawn. In fact, it identified potential benefits for enlarging the option selection and an additional choice will be made available to farmers.

One point the minister would not budge on was a recommendation for the date of first ploughing and slurry spreading to be brought forward a month to 1 February. She decided that 1 March reflected an important period for food availability for farmland birds.

Another recommendation blocked by the minister was for Glastir application forms to be combined with the SAF. Although the review panel believed this would rationalise the application process, she took a different view, insisting it would create an even more complex and larger SAF form and, ultimately, risk payment delays.

Among the farming unions who have reacted to the series of proposals, CLA Wales says the assembly government must continue to monitor and review Glastir to ensure Welsh farmers have the best possible scheme.

CLA Wales director of policy, Sue Evans, who was a member of the review group, said that by adopting most of the recommendations, the minister had produced a more farmer-friendly agri-environment scheme.

But she said the greatest frustration was the European Union’s demand that all payments be calculated on a “compensation for profit foregone plus costs basis”.

CLA Wales argues that payments for environmental products cannot reflect their true value to the public.

With a revised scheme in place – some of the recommendations will be adopted immediately, others in the near future – the decision on whether Glastir is financially viable for the farming community now rests with farmers.

What’s in, what’s out

Winners and losers have emerged from a wishlist presented to Wales’ Rural Affairs Minister by the Glastir independent review panel. The panel had wanted a series of new options created to broaden the entry criteria for the scheme’s All Wales Element. The options accepted will all attract points towards the target total.

• Liming for environmental gain – the assembly government is concerned that, if widely applied, this option would be detrimental to climate change leading to increased carbon emissions

• Hedge coppicing – this must be done to an agreed specification

• Traditional boundaries – this option was considered to be too costly

• Protection of in-field/veteran trees – there will be no cultivation, spraying or fertiliser application under tree canopies

• Hedgerow management boundary/roadside hedges – one side only