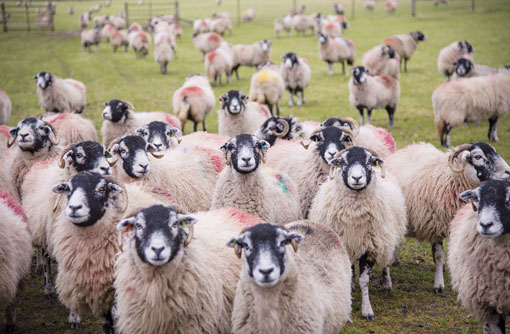 Hill farming is one of the most demanding – and often least financially rewarding – of all livestock sectors, but one new young farmer entrant is making a go of it. Jeremy Hunt reports.

Deciding to take on a hill farming tenancy isn’t for the faint hearted, but it is a challenge new entrant Michael Longworth, from Cumbria, is willing to take.

Twenty three year-old Mr Longworth, has been successful in winning the tenancy of the Peak District National Park’s North Lees Farm at Hathersage in Derbyshire after seeing an advert for the 10-year Farm Business Tenancy.

The family farm in Cumbria has a small dairy herd and 500 Herdwick ewes, but since leaving school Mr Longworth has been self-employed and worked for several neighbouring farmers.

“My parents and my uncle run the farm, but it isn’t big enough to support anyone else, so the aim has always been to try and find a farm to rent. But everyone knows that’s not easy,” says Mr Longworth.

After being unsuccessful in an application for a local farm he was invited to join the Fresh Start scheme – a pilot project at Newton Rigg College, Penrith and instigated by the newly-formed National Centre for the Uplands.

“It was a real turning point for me and a big help once my fiancée and I decided to apply for North Lees Farm. It helped us present our livestock business plan and gave us plenty of new contacts in the industry.”

North Lees Farm includes more than 460ha (1,100 acres), including 46ha (110 acres) of in-bye land and about 250 Swaledale ewes. A herd of about 23 native breed suckler cows is planned for the future to meet the farm’s HLS agreement.

A derogation from the HLS agreement – which requires grazing by native-breed cattle – has been allowed for one year to alleviate the need to spend on suckler cows.

“The derogation has been very useful. It gives us some financial relief and helps us get a real feel for the farm and the grazing needs of the stock.”

Be honest in your application

Because there’s always tough competition for this type of farm, the couple knew a clear and concise livestock business plan was critical. But they were determined to present plans for the sheep and beef stock that would be achievable.

“We both put a lot of hard work into the application. We knew we had to present a plan for the farm’s future that was deliverable and would create a good foundation for a successful livestock holding. We were totally honest and realistic about what we felt we could achieve.

“It’s very hard getting a start in farming, but it’s no use telling a landlord what you think he wants to hear if you can’t deliver it. And landlords know what a farm can and can’t do. So my advice to any young person applying for a tenancy is to be open about your intentions and not propose things that can’t be realistically achieved.”

Mr Longworth admits funding the venture wasn’t easy. Working with the bank he’s been with since he was a teenager, he presented a cash flow and business plan. Most of the initial investment made in the farm will cover livestock and also entitlements.

“We haven’t been able to borrow as much as we wanted to, but it’s enough to get us started.” The couple have also received guidance through the Jason Kanabus Fund operated by the Princes Trust.

Plans for the farm

Mr Longworth has a keen interest in breeding hill sheep and the initial plans for the flock are to run Swaledale tups rather than opt for producing Mule lambs.

“I’ve always been very interested in Swaledales, so the intention is to concentrate on building up a good pure-bred flock and to expand numbers from home-bred replacements. And it’s important to be aware of your limitations and not incur additional costs at the outset.

“If we ran Bluefaced Leicesters we’d need to take more lowland grazing. We have enough in-bye for lambing-time and for silage making, but there’s nothing to be gained by being too ambitious at this stage.

“Maybe in the future, if we can find additional grazing, we may consider crossing some of the flock, but at this point the aim must be to keep costs low and run a straightforward system,” he says.

But one element of his flock’s management plan is clear, and that’s to keep the flock as young and vigorous as possible.

“When you’ve got younger sheep, they thrive better and perform better. They don’t cost as much in terms of feed to support them. The less we have to spend at this stage of the business the higher the margin should be, so we intend to sell three-crop ewes that still have some value in them as crossing sheep for another flock.”

A traditional hill farming management structure is planned with an April lambing and store lambs sold in October. Selling store lambs and draft ewes will provide the main source of income, but Mr Longworth knows he’ll have to look outside the farm for additional income.

“To earn enough to re-invest in the flock and the business means I’ll have to supplement what the livestock produce. I’m an experienced stone-waller so I’ll be looking for work.”

Next year should see the first cattle arrive at North Lees Farm but the focus will be on low-maintenance. “We’ll probably go for Blue-greys that will meet our HLS requirement, but will be low in terms of inputs. The aim is to sell suckled calves in the autumn or possibly as stores in the spring if we feel we can run them over the winter. A lot of what we are planning will very much depend on the cash flows we’ve set for the farm,” he says.

Mr Longworth is confident upland farming has a future and can provide a profitable livestock enterprise for young people keen to start farming on their own account.

“I think sheep and beef production will continue to be profitable, but you’ve really got to be on top of everything you do in terms of costs, and at the same time always be aware of any opportunity that could bring some more income into the farm and grab it with both hands.

“That’s what I’m aiming to do with the lambs I sell and the calves I’ll have in the future. It’s important to support the local auction marts, but if there were added value options for marketing stock I’ll be looking at them very closely.”

Read more on getting in to farming