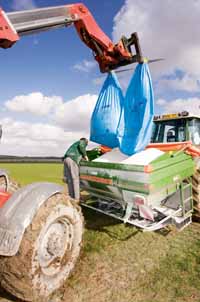 With 90% of the nitrogen market said to be completed this season, buyers of the remaining 10% would be well advised to shop around. This is because small parcels of all types of fertiliser remain in stock around the country and many are being sold at prices below the replacement costs, illustrated below.

New supplies of AN have shot up in price, somewhat unexpectedly, forced up by continental shortages. These were exacerbated by nitrate plant closures by Yara and GPN (Grande Paroisse Nitrogen, part of Total).

January, when gas is most expensive and the market largely satisfied, is a good time for shutdowns. Indeed, the GrowHow ammonia plant at Ince is currently shut down but production of AN continues using bought-in ammonia.

This time, however, demand for nitrates continues in Europe, last week resulting in a k40/t price hike and a £20/t rise here. Against this, the UK price for 25.5.5 looks good, that is if any fertiliser costs over £300/t can be said to be good. No problem really for the corn farmer, but the horn producer will suffer. Indeed, about 50% of the grassland compound market has yet to be placed.

Prices of granular urea from Egypt are strong but little is coming into Britain as current stocks should see us through. Likewise, replacement costs for Lithan (ammonium nitrate from Lithuania) are high enough to match UK costs, but again this is in-stock in places.

Although supplies are tight in the UK, the only nutrient in really short supply is sulphur. GrowHow is not accepting orders for sulphur products at the moment, but in reality, most of those who need it have already purchased.

The long-expected hike in potash prices has come to pass with muriate at £330/t and rising.

Many farmers will be following stories of the so-called “potash sector consolidation wave” which has seen Russia’s two biggest potash groups, Silvinit and Uralkali, unveil a merger, Germany’s K+S buy Canada’s Potash One, and Sirius Minerals acquiring the York Potash company. This is symptomatic of the globalisation of the fertiliser industry as a whole and given that potash is a finite resource, albeit in ample amounts, is probably no bad thing if it increases investment and efficiency in mining.

The newly published report of the Foresight Project on Global Food and Farming Futures will take a considerable amount of digestion, but it seems clear that investment in the fertiliser industry may finally come of age.