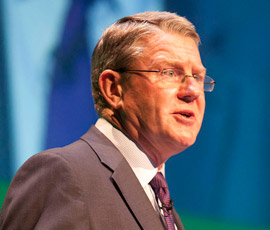 Farm leaders have joined forces to fight for a fairer deal on CAP reform for English farmers.

The coalition – between the NFU, Country Land and Business Association (CLA), and the Tenant Farmers Association (TFA) – comes amid increasing concern that DEFRA wants to switch money from direct payments to rural development measures.

The three organisations also fear DEFRA wants to give farmers no choice in how they implement environmental measures on their land in return for the payments – closing off options available to farmers in other parts of the UK and Europe.

“Let me be really blunt and to the point,” Mr Kendall told delegates. “I’m worried that this is exactly what will happen, on both scores, as a result of this government’s stance on CAP reform.”

Mr Cotterell acknowledged the coalition did not agree on every CAP issue. But it was united on the two central issues. Greening should not impose higher standards, or compliance costs, on English farmers than those in other parts of Europe, he said.

“We are all concerned that the government may gold plate greening – and that it may increase modulation rates,” said Mr Cotterell. “There are always going to be differences on emphasis between the three organisations but we all agree on the principles – and that is important.”