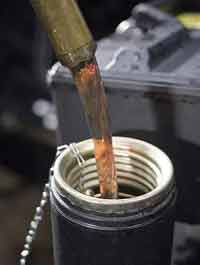 The rise in farm fuel bills looks set to continue, despite a fall in the price of oil during the first half of May.

Brent crude prices have fallen from $85 per barrel this time last month to nearer $76 on Wednesday (19 May), following investor concerns over debt problems in the Euro-zone. However, this is thought to be a temporary blip in what commentators forecast as a period of sustained high oil prices, NFU transport and inputs adviser Peter Garbutt said.

“The oil producing cartel, OPEC has just raised its forecasts for world oil demand in 2010 by 50,000 barrels per day and the US Energy Information Administration has predicted a further 10% rise in crude prices over the next two years to $87 per barrel. Although the International Energy Agency has reduced its global oil demand forecast for 2010, it still sits at 1.6m barrels a day more than in 2009.”

The last 12 months had seen the price of red diesel rise by over 14p per litre, an increase of 38%, he said. In April, red diesel prices in the NFU/Farmers Weekly Inputs Price Monitor survey hit the highest point since summer 2008, rising to an average of 52.9p per litre but peaking as high as 57p per litre.

“We’ve not yet seen much evidence that the recent oil price drop has fed through to farm prices for fuel and with the AA calling on retailers to pass the savings on for other grades at the pump we want you to tell us what you’re paying for your red, white and kerosene.”

• Go to www.fwi.co.uk/nfu-IPM to take part in the latest Inputs Price Monitor survey.