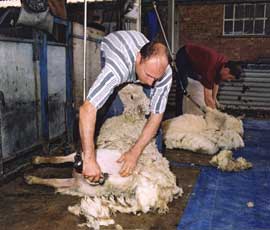 Sheepshearers from New Zealand and Australia have been granted a 12-month reprieve to be able to work in the UK, thanks to a loophole in latest government immigration rules.

Negotiations between the Home Office and the National Association of Agricultural Contractors mean changes to migrant worker regulations announced this week will not affect foreign shearers for another year.

The change means only migrants applying for jobs which require qualifications at graduate or equivalent level will be granted work permits.

But following discussions between the Home Office and the NAAC, a transitional scheme has been put in place to allow shearers into the UK on a seasonal temporary basis this year.

Jill Hewitt, NAAC chief executive, said the scheme means the UK would not suffer from a shortage of shearers this year.

“We are working closely with shearing contractors in the UK, and shearing associations in New Zealand and Australia, to try and ensure the smooth passage of sheep shearers to the UK this spring,” she said.

“There is no reason, with the transitional arrangements in place, to expect that there will be any problems this season.”

He said the government needed to recognise sheepshearers were skilled workers and shearers from Australia and New Zealand were essential to the sheep industry.

“Every year this comes up and every year the immigration service rules shearers are vital,” he added.

“If the government is happy to grant exemptions for the number of years that they have, they must recognise there needs to be a more permanent solution. We can’t keep going around in circles like this.”

Mr Morris said foreign shearers cut about 20% of the national flock as there were not enough UK shearers to complete the job.

“Sheepshearers from overseas are a much-needed group of people,” he added.

“These rule changes create a lot of confusion and if shearers get confused and don’t come over to the UK as a result then it’s the sheep who will suffer.”