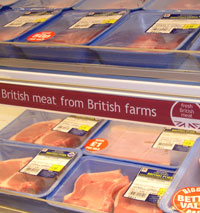 Supermarkets and food companies should give shoppers clearer information on the origin of their food, Mr Benn told the Oxford Farming Conference on Tuesday (6 January).

“When you buy a car you know its service history. When you buy a house you get a detailed survey. So why do we accept knowing so much less about what we are putting into our bodies?”

Mr Benn criticised European regulations which mean a pork pie processed in Britain from Danish pork can legitimately be labelled as a British pie.

“That’s a nonsense and it needs to change,” he told conference delegates.

“We are pushing in Europe to bring about a change to clearer country-of-origin labelling that will tell us where an animal was born, reared and slaughtered.”

Processors and retailers could get ahead by voluntarily introducing country-of-origin labelling, Mr Benn added.

“I intend to meet them to discuss how we can make this happen.”

But his call for better labelling was met with bemusement by some delegates who said the Red Tractor Logo already denoted food produced to British farm standards.

The Soil Association, which has its own separate food labelling scheme, also expressed surprise at Mr Benn’s speech.

Robin Maynard, the association’s campaigns director, said: “Hilary Benn should know there’s already a label that delivers what he is calling for – the Soil Association’s organic symbol.”