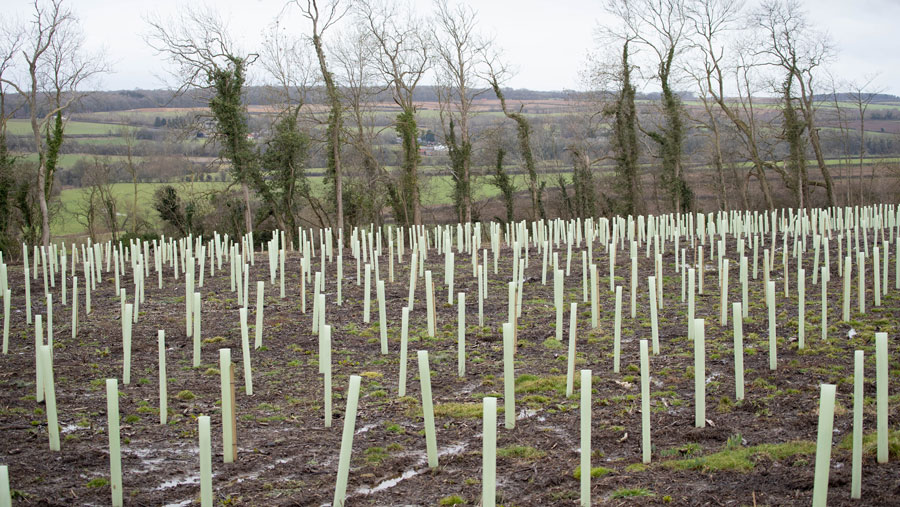 Farmers in England will shortly be able to apply for a new woodland creation grant which will offer top-up payments in recognition of the wider benefits of woodland to society.

The England Woodland Creation Offer (EWCO), which is due to open to applications in the next few weeks, was announced as part of the England Tree Action Plan and will be administered by the Forestry Commission.

It replaces the Woodland Carbon Fund grant scheme, which closed for applications in March 2021.

The scheme will be funded through the Nature for Climate Fund and support the creation of more than 10,000 hectares of new woodland over its lifetime.

It will focus mainly on the establishment of native broadleaf woodlands, but will also support well-designed majority conifer and mixed woodlands.

The minimum size of application will be 1ha, with a minimum block size of 0.1ha.

The ECWO will cover the capital costs of establishing the woodland (up to a payment cap yet to be announced) and annual maintenance payments for 10 years.

Payments will be available for creating woodlands through natural colonisation, as well as planting with saplings.

However, there will be additional payments on offer for the establishment of recreational infrastructure such as paths, picnic benches, forest roads and tracks.

Stackable payments will also be available that recognise the public benefits that woodlands can bring.

These include contributions for:

Further details about the level of payments is expected when the scheme is officially launched.

Applicants will continue to be eligible to claim Basic Payments Scheme (BPS) payments on land entered into an agreement, provided the land meets certain eligibility requirements.

The intention is for the ECWO to pave the way for the introduction of the Sustainable Farming Incentive, Local Nature Recovery and Landscape Recovery schemes which will be the main delivery mechanisms for publicly funded woodland creation after 2024.

For now, if preferred, farmers will also be able to continue to apply for the Countryside Stewardship Woodland Creation grant, which is being revised to combine the capital and maintenance elements.