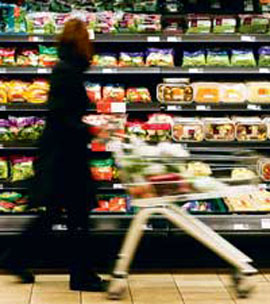 The government has published long-awaited plans for a supermarket watchdog to oversee the relationship between retailers and suppliers.


The draft Groceries Code Adjudicator Bill was unveiled on Tuesday (24 May).

A copy of the draft Bill, published by the Department for Business, Innovation and Skills, can be downloaded here.

The Groceries Code Adjudicator will be responsible for ensuring retailers comply with the Groceries Supply Code of Practice.

The code is designed to curb abuses of power in the groceries supply chain and protect the long-term interests of consumers.

“Every day, food producers are going to the wall. And many more are struggling as a result of the market-distorting power of the large supermarkets.

“Every day this happens means that the proposed supermarket watchdog is being introduced another day too late.

GMAG members include the NFU, National Farmers Union of Scotland, the British Independent Fruit Growers Association and other bodies.

Mr George said the proposal to establish a supermarket adjudicator to ensure fair dealing in the grocery supply chain had cross-party support.

“The government has no excuse to delay. Speed is of the essence. No time should be lost in setting up an effective watchdog with real teeth.

“Food producers here and in the developing world want to concentrate on the efficient production of healthy food, not perpetually fight for their survival.”

But retailers say a watchdog would achieve nothing new.

“Retailers are doing their best to cushion customers from the full impact of these increases.

“The extra costs of dealing with a new administrative body will make it even harder to keep price rises away from shop shelves.”

It was in the supermarkets’ own interests to have good long-term relationships with their suppliers as part of securing their supply chains, said Mr Opie.

It is three years since the Competition Commission warned that too much power in the hands of big retailers would be bad for suppliers and consumers.

New rules to enforce fair dealing between supermarkets and suppliers came into force in February 2010.