Lord Rooker (centre) met farmers Roger Pride (left), John Gunner and John Emerson, who have all had stock slaughtered during the foot-and-mouth crisis. 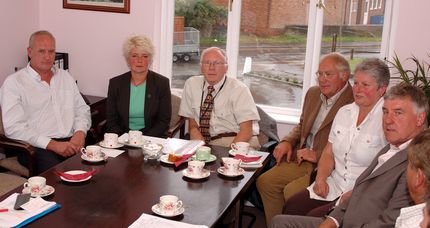 Detectives from New Scotland Yard have been brought in to review CCTV footage of the Pirbright site to establish if human movement was responsible for releasing the foot-and-mouth virus.

At a meeting on Tuesday (14 August) with the farmers directly affected by the outbreak, junior DEFRA minister Lord Rooker said investigations as to how the virus escaped continued but, “all possibilities were being considered”.

A review of the surveillance footage would, he said, help establish if human movement was to blame and if it was accidental or an act of sabotage.

The Health and Safety Executive is pursuing other lines of inquiry, including testing soil samples taken from the site for the foot-and-mouth virus, he added.

Lord Rooker said he felt humbled to hear the experiences those affected had endured and was alarmed that those with diversified enterprises were unable to get business insurance for losses incurred due to foot-and-mouth restrictions. “This makes a nonsense of the cost-sharing agreement,” he said.

A recurring theme of the meeting was biosecurity at Pirbright. One farmer questioned the role of vaccine production for commercial gain if it put domestic livestock at risk.

“We’re manufacturing the vaccine here, sending it to Brazil and then importing the vaccinated meat. Am I missing something there? That doesn’t sound right to me,” he said.

But the minister defended the right to hold live viruses for research purposes, saying it was necessary to check that virus stocks behaved in a similar manner to those found in the environment. And he confirmed DEFRA was yet to receive a specific reason why work was being carried out on this strain at Pirbright, by either the Institute for Animal Health or animal health company Merial.

Asked if the government was considering using vaccination, the minister said he hoped it would not be necessary. “I’m keen to resume exports as soon as possible. British beef has an excellent reputation in Europe and customers have come to us since exports have resumed. I’m keen to resume that business,” he said.