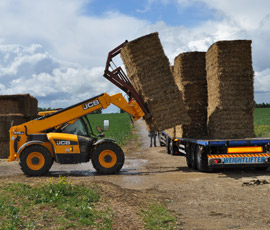 Burning straw to generate electricity may seem like sacrilege to livestock farmers, but it is an expanding industry in the arable east providing growers with an alternative income stream. Paul Spackman reports

Construction of the UK’s second straw-fired power station has just got under way in Lincolnshire and with more projects in the pipeline, demand for straw is hotting up across the eastern counties.

Once complete, the 38MW Sleaford Renewable Energy plant will use around 240,000t of biomass a year, mainly large-bale (Hesston or Quadrant-type) wheat straw from within a 50-mile radius of the site. It will also be able to take straw from other crops, such as oilseed rape, and up to 40,000t of chipped wood, from willow coppice and clean, untreated wood.

The facility is based on a similar model to the Ely straw-fired power station in Cambridgeshire, which uses more than 200,000t of straw a year sourced from local farms on long-term contracts.

Planning permission for the Sleaford plant was granted in November 2008 and commercial operation should begin in January 2014, says David McDonald, operations director for development company Eco2.

“The majority of our fuel supply had to be in place prior to securing finances, so we’ve contracted 150,000t already, but we are looking to procure more fuel and will be taking straw from next harvest [2013]. Security of fuel supply is obviously very important to us, so we’re also going to have 60-70,000t of buffer straw supply to mitigate volume and price fluctuations.”

In addition to the Sleaford plant, he said the company was looking to sign up straw suppliers for another 38MW plant further north in the county at Brigg, which has got planning permission and is in the final stages of arranging finance. Planning permission for a third straw-fired plant at Mendlesham in Suffolk is also being applied for.

Together the three new plants, combined with the existing Ely site, could take around 800,000t of straw in the future from local growers.

As with other power station contracts, security of fuel supply is the main consideration for the operators at the Sleaford plant, so long-term contracts are used. Straw suppliers are asked to sign up a given tonnage for 12 years, with no break clause, although in the event of exceptional market or legislative changes not reflected in the initial contract, there may be scope for re-negotiation, Mr McDonald says.

There is a minimum supply of 250-300t, but no maximum. Farmers are responsible for storing the bales until needed and payment will be made 30 days after straw is collected. Mr McDonald says the exact contract price remains confidential as it depends on individual circumstances, but it is index linked and at a level that makes it a “worthwhile” for farmers and the power station. The final payment to farmers will be based on 15% moisture, and reduced on a sliding scale for wetter loads up to a maximum of 25% moisture.

“The price won’t reflect the volatility of the straw market, so some year’s suppliers will gain, other years they’ll lose. The main thing is that the contracts provide stability. I’d never recommend a farmer commits their entire straw tonnage to it, but at least its another option to consider.”

Fieldsmen will regularly inspect straw stacks to check degradation and Mr McDonald says there may be scope to arrange collections around individual farm circumstances. However, in many cases the length of storage on farm will depend on when the power station needs the straw and its own logistical planning.

Brown & Co’s Rob Meadley says such power station contracts provide a good alternative income stream and price stability, but he advises any farmers considering them to do so carefully.

The term of such supply contracts (typically three to 10 years) is longer than many other contracts growers may be used to, so a long-term impact assessment is advisable. This should consider things such as possible soil compaction from balers and loaders, loss of soil organic matter, and the cost of extra fertiliser required to meet nutrient loss (particularly phosphate) from continuous straw removal.

In addition, there may also be an impact on timeliness of drilling following crops, particularly where baling and clearing fields in a catchy harvest could delay the early establishment of oilseed rape, he notes. Power stations normally want an even supply of material through the year and farmers are generally responsible for loading lorries when they come to collect straw. “These extra ‘hassle factors’ can be difficult to put into monetary terms.”

Another key consideration is the amount of straw to commit to the contract. Most are based on a fixed tonnage that must be supplied each year, so play it safe by assessing what is the maximum volume you could provide in a bad wet or drought-hit year, he advises. “Contracts usually have some leeway on volume of plus or minus 5-10% depending on the season, and if it’s classed as an exceptionally wet year or severe drought, force majeure may apply.

“Up to 25% moisture will normally be accepted, although price will be reduced accordingly.”

Stacking bales correctly helps prevent wastage, although Mr Meadley reminds farmers to observe health and safety guidelines – see www.hse.gov.uk/pubns/indg125.pdf. The top layer of bales can often end up being wasted, but the sides are normally OK and if bales are on hardstanding, the bottom layer should be useable too, he says. “But be clear on the exact bale dimensions required by the power station and remember that the bottom bales can sometimes get squashed and be outside the size specification required. It’s good to make sure you fully understand the process that goes on in the power station and how this affects what they want.”

Insurance is also important, as bales normally remain the ownership of the farm until they are on the lorry for delivery to the power station. “If anything did happen to the straw stack, such as arson, it would be down to the farmer to replace the tonnage from the open market to fulfill the contract. Hopefully, the insurance value would cover the cost of buying in the straw required, so it’s worth speaking to your insurer about any plans.”

• Find out more at www.sleafordrep.co.uk