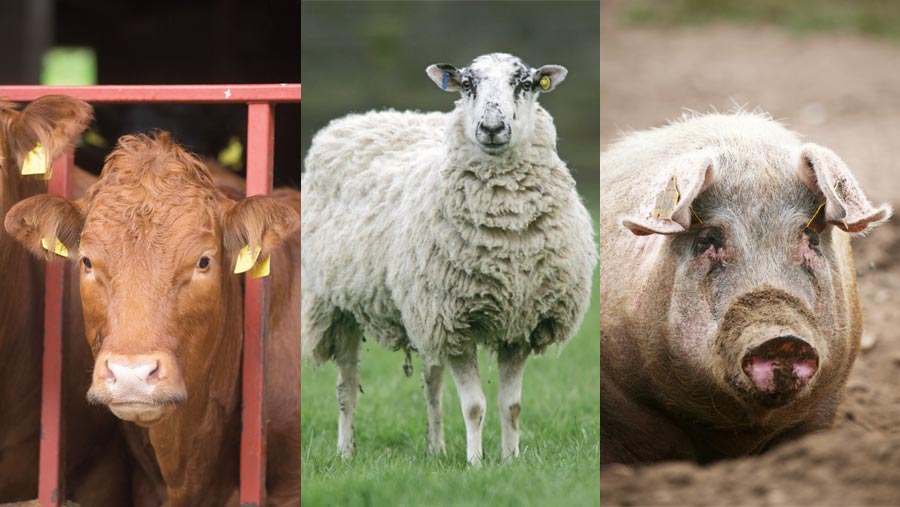 Brexit offers opportunities to exploit the potential of British red meat production. But overcoming trade barriers, investing in processing capacity and meeting market requirements will take time and a change in mindset, according to the AHDB.

In its latest Horizon report – Meat and dairy: Our prospects in the global marketplace – the AHDB highlights factors that could influence the UK’s ability to win export markets for beef, sheep and pigs, post-Brexit.

The EU has very much underpinned export trade for red meat and the possibility of less favourable access in the future will push the livestock sector to look beyond Europe for potential sources of growth, the report says.

There are opportunities to open new markets and develop existing ones at home and abroad.

While Brexit will provide fresh momentum to the export drive, the report warns that growth will take time.

Production cycles for livestock products are typically long and, because the UK’s forage-based beef and lamb systems are seen as premium quality, demand is niche and markets will need to be developed.

The report also highlights technical challenges in developing non-EU markets, particularly for beef and sheep where access is a current barrier, and the need for investment in greater processing capacity to supply the growing export trade.

Worldwide consumption of pigmeat and beef is expected to rise significantly over the next 10 years, according to OECD-FAO projections.

While the bulk of the increased consumption is expected to be met by domestic production, there are clear opportunities for countries exporting red meat. Asia is key and is forecast to account for two-thirds of the projected world growth in consumption.

Prospects for non-EU exports are hampered by limited access to markets and time will be needed to work at reopening or establishing new ones, the AHDB warns.

Major markets such as the USA and Japan still have BSE-related restrictions while the Middle East, North Africa and Indonesia are limited by the need for halal product.

Less-developed economies will also demand a low-cost product, so the best opportunities may be in low-value cuts and offal to West Africa and emerging Asian economies such as the Philippines. China could offer longer term growth and volume prospects for both low- and high-value cuts but the UK is yet to gain access.

Openings for UK sheepmeat outside of the EU are also limited in the short term due to its relative high cost and lack of market access.

Sheepmeat consumption in China has been falling and the UK will continue to face stiff competition from low-cost southern hemisphere producers.

Openings for premium cuts are limited to the rising middle classes in China and India while the USA and Canada could also offer prospects for premium cuts. In the longer term, China is likely to offer some opportunities for offal, says the report.

Pigmeat prospects could be significant in south east and east Asian economies for lower value cuts and offal. The UK already exports offal to China through seven businesses which have gained access since 2007.

Three of these companies export trotters, which have little or no value in the UK but have retailed for £1.43/kg in China this summer – a trade worth £200m to the UK.

In addition, West Africa, South Africa, Taiwan and South Korea could offer demand for commodity product. Premium opportunities are more limited to North America, Australia and New Zealand with a small potential in China and Japan.

So-called carcass balance issues will also need to be addressed. For example, import substitution for pigmeat would mainly involve loins and legs.

But if the UK produces more pigs to yield those cuts, it will also mean more shoulders and offal to sell. Unless demand for these could be boosted on the UK market, it may not be economical.

The sheepmeat sector is further hampered by seasonality of supply. While it is 92% self-sufficient, this masks the fact that there is a supply deficit in the first half of the year and a surplus in the second half.

Almost three-quarters of that growth will come from developing countries – mainly China, which benefits from economies of scale and Brazil, which has abundant resources and a devalued currency.

Overall the UK is a producer of high-quality, high-priced goods and so lacks competitiveness against North and South America, Australia and New Zealand, which are geared up to meet global customer demands with low-priced products.

The UK is also hampered by its relatively high land and labour costs while processing and supply chains are often fragmented, limiting competitiveness.

Countries with the greatest additional market share are likely to be low-cost producers – Brazil, USA, Argentina and India. China will also expand its output, displacing some import demand.

For UK suckler cow herds, costs are about twice as high as Australia, Brazil and the USA, according to the AHDB.

The UK costs are due to a smaller average herd size, resulting in proportionately higher labour costs. British farmers also invest more in machinery and buildings.

British costs are higher compared to other EU member states such as Ireland and France where many farmers work part-time and may have off-farm income. Irish and French farmers make greater use of forage and reduce machinery investment costs by relying more heavily on contractors.

Australia and New Zealand are expected to continue dominating the global market with their systems geared towards exports. Australia is already targeting the growing global halal market. But only China is expected to increase sheep production substantially.

In the UK sheep sector, costs are three times higher than Australia and New Zealand, which have more ewes managed per full-time labour unit. The antipodean countries also have lower requirements for machinery and buildings.

The USA, Brazil, and the EU will be the UK’s fiercest competitors although European exports are projected to fall by 11% in the next decade. China is expected to continue as the biggest growing market, although its developing pig industry will limit this.

The UK has some of the highest pig production costs of any country, for example 66% higher than the USA and Brazil. They are also up to 20% higher than those of other exporting countries of northern Europe.

The main reason for this is the lower number of pigs weaned per sow per year in both indoor and outdoor sow systems.

How can the UK compete?

The AHDB report suggests that future trade will depend on the UK’s long-term relationship and trade with the EU. I

It also adds that livestock producers could begin now to develop a different mindset that ditches notions of exports markets as product dumps and instead looks at how to compete.

To make this change it has suggested a nine-point action plan for the red meat sector.