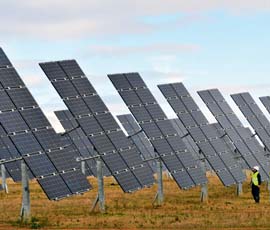 The government has gone ahead with plans to slash the feed-in tariff payment for large-scale solar systems, leaving investors facing a race against time to get projects up and running to qualify for current rates.

Generation tariffs (see below) announced last Thursday (9 June) were unchanged from those proposed in the ‘fast-track review’ consultation in March and mean that new solar installations over 50kW will receive around half of the current FiT rate from 1 August.

Anaerobic digestion will get slightly more under the review, but many in the industry have said the new rates are still insufficient to generate any significant increase in AD uptake on farms.

Justifying the cuts to solar incentives, energy and climate change minister Greg Barker said the FiTs consultation, which attracted over 500 responses, had reinforced the need to make urgent changes to prevent the scheme becoming “overwhelmed” by a number of larger planned PV projects.

The Department of Energy and Climate Change estimated that every 5MW large-scale solar scheme would cost about £1.3m per year and 20 such schemes would cost £26m, enough to support 25,000 smaller domestic household schemes. The FiT scheme is funded through a levy on electricity bills, rather than the government’s own coffers, but DECC is concerned about pressure on household budgets and how any funding is allocated.

“I want to drive an ambitious roll-out of new green energy technologies in homes, communities and small businesses and the FiT scheme has a vital part to play in building a more decentralised energy economy. The consultation has reinforced my convictions of the need to make changes as a matter of urgency.”

But the announcement was strongly criticised by industry organisations, who said future development of solar and farm biogas would be severely restricted.

The NFU was particularly disappointed at the lack of concessions for those installing mid-size solar roofs over 50kW and the lack of transitional arrangements for those who have already made significant investments in solar farms that may not be officially “switched on” before new tariffs begin.

“We do not think this policy is rational and it will certainly dent confidence in the government’s green ambitions,” NFU chief renewable energy adviser Jonathan Scurlock said.

NFU expected no more than five to 10 solar farm projects would be completed before the 1 August cut-off, and it understood the High Court had granted a judicial review to a group of solar developers against DECC, to be heard by the end of July.

Dr Scurlock said hopes of increasing the uptake of farm-scale AD had also been ruined by DECC’s “penny-pinching” plans. “They will result in a handful of additional AD projects being deployed, not the 1,000 on-farm plants that we have argued would deliver significant multiple environmental benefits in terms of better nutrient management and greenhouse gas abatement.”

Solar Trade Association chairman Howard Johns said the coalition government had “got it seriously wrong on solar” and urgent intervention was needed to prevent a “calamity”. “Treasury have crippled DECC’s ability to respond to major developments in solar and DECC itself hasn’t got to grips with this technology,” he said.

“Ironically, crushing solar makes zero economic sense for UK plc because it will lose us major manufacturing opportunities, jobs and global competitiveness. It also risks locking us in to more expensive energy options in future.”

Renewable Energy Association chief executive Gaynor Hartnell accepted there was some need to reduce tariffs when justified, but said the latest decision was wrong.

“The logical approach would have been a 25% reduction across the board for solar, irrespective of size. This is on account of panel costs falling significantly, a phenomenon expected to continue so that PV should need no subsidy before the end of the decade.

“We think government should increase the size of the feed-in tariff budget and encourage a healthy PV industry to establish in the UK.”

She said the whole issue had been handled poorly and larger-scale PV had been “demonised”, when it was actually the most cost-effective approach.

The new feed-in tariff rates, subject to parliamentary approval, are shown below. They take effect from 1 August 2011 for new entrants to the FiT scheme. Installations already accredited for FiTs at the time the changes come into force will not be affected.

Oxfordshire farmer Adam Twine is in the process of setting up a 5MW solar park on his farm near Faringdon. The 12ha site – formerly in arable production – will cost around £12m to build, and he hopes to get it connected to the grid by mid-July.

“We’re aiming for Ofgem registration prior to 1 August to get the current FiT tariff rate, as it’ll prove very expensive if we don’t.”

Planning permission was applied for last December and granted in March, just as the FiT review was announced. The initial funders subsequently pulled out, but eventually a new deal was agreed with the project’s current owners, Blue Energy.

Since then, it has been all systems go. “Agreements were signed on 16 May and construction started that afternoon. We’ve around 30 contractors working on site 14 hours a day and in theory it’s all on schedule,” Mr Twine said. German contractors are installing the sub-structure and polycrystalline panels, while English firms are responsible for electrical systems and grid connection.

As part of the deal with Blue Energy, the landowners – Mr Twine and his sister – will receive a rental income of 4% of gross income from the site for 25 years. This term could be increased to 30 years if the site is not live in time to receive the higher FiT rate. The lease agreement also includes a call-back option that gives an option to buy the project back at a fixed sum within its first year.

A new co-operative, called Westmill Solar Co-operative, was recently set up between Mr Twine, developers Low Carbon Solar – which helped secure funding and arrange grid connection, and Energy 4 All – which promotes community development. It is planned to offer shares through the co-op in order for it to raise sufficient money to buy the site. Mr Twine anticipated a 9-10% return on investment for shareholders over 25 years and said local people would get priority in the event of the share offer being oversubscribed.

“Now that the 40-70% cuts trailed in March have been confirmed, the ‘greenest government ever’ surely needs to sit down with the industry to ensure that the knee-jerk policy-making of the last eight months ends and some stability is restored to the sector and its customers.”

“The AD industry will be disappointed with the new levels announced: FiTs have so far failed to help more than a couple of projects, and this increase is too small to make any significant change to that.”

“The values will not stimulate the AD market as the rates of return will not attract investors or the banks at current capital cost levels. Capital costs need to come down as the government has missed the opportunity to kick-start development by not offering enhance FiTs even in the short term.”

“With these new rates we anticipate that large ground-mounted solar farms will not be progressed unless installation and electricity export can be realised prior to 1 August. It is also unlikely many schemes above 50kWp in scale will be progressed as returns will drop below 8%. This will restrict development to south-facing roofs or areas of land adjacent to buildings of no greater than 400-500 sq m where returns in the sub-50kWp bracket are still attractive, being upwards of 9%.”

Country Land & Business Association president William Worsley acknowledged the review of FiT rates may have been necessary, but said the cuts to solar rates unfairly penalised early adopters of the technology. This could have been reduced with a transition scheme for large-scale projects that were granted planning before 1 August.

“The industry has expected this would happen and has adapted. We’re still seeing a lot of demand from farmers for solar under 50kW, as it can be a profitable option, particularly where wind turbines are less suitable.”