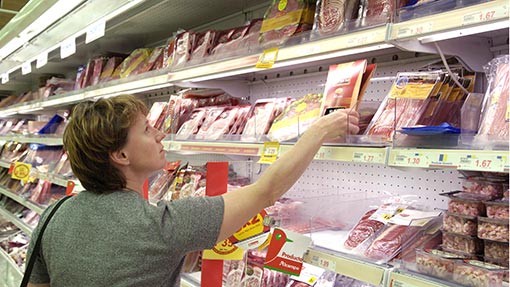 Volume sales across all fresh meat categories fell in the year to 27 April 2014, while the value of meat sales increased, captured increasingly by the discounters.

Sales of pork fell the least in volume (by 1.8%) compared to beef (down 4.9%) and chicken and lamb (both down 3%), as consumers switched from more expensive beef and lamb, said Kantar Worldpanel. However, this choice was somewhat undermined by an increase in sales of frozen chicken and fish.

Pork managed a 0.4% increase in sales values, while lamb recorded a 0.9% increase despite a 0.6% fall in its retail price – the only fresh meat category to suffer a drop in retail price.

The Co-operative supermarket fared particularly badly, with volume sales of pork down 11.6%, bacon 9.6% and ham down 2.8% – the biggest negative value change of all the supermarkets.

Tesco was the only other supermarket to record reduced value sales across three fresh pigmeat categories, with a 2.4% fall in pork, 5.5% in bacon and 0.6% fall in ham.

Sausage sales increased 8.8% in value overall, with only Waitrose, Marks & Spencer and the discounters growing ahead of the market, while ham sales were also up 5.2%.

Bacon sales were down 2.1% in value, with Waitrose and discounters the only retailers to grow their sales.

After reaching record levels in autumn 2013, the GB finished pig price fell after Christmas, but low EU pig prices meant this lasted a little longer than last year, said Bpex. However, the DAPP averaged 163p/kg in March, 6p more than March 2013 and started to climb in April.

EU pig prices were 10% lower in March than the same time in 2013, following a Russian ban on imports, however prices recovered after strong consumer demand and export orders from Asia.