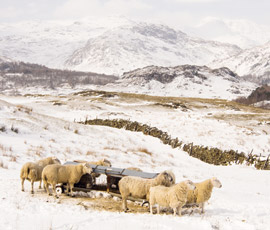 Farmers in Scotland who were hit by the extreme weather earlier this year will be able to apply for a share of £6m of financial help at the start of June.

The Scottish Government has announced application forms and detailed guidance will be available on its website on Monday June 3, although payments will not start to be processed until 1 August.

Applications will be accepted from producers who:

Farmers will have over a month to submit their application before the closing deadline on Friday 5 July.

Applications cannot be accepted from an agent on a client’s behalf without a letter of authority from the client.

The Weather Aid group, chaired by chief agricultural officer Drew Sloan, will meet at the end of July to review the applications and finalise the level of support available for individual producers.

Priority will be given to those affected by the snow at the end of March.

The total pot of money includes an extra £250,000 for the fallen stock fund to be used to rebate some of the costs to livestock producers during March, April and May.

Rural affairs secretary Richard Lochhead said: “This is a distressing time for farmers and the industry as a whole. I know, having spoken to a number of farmers, just how big an impact it has had on them, and this money will provide a much needed lifeline to help them get back on their feet.”