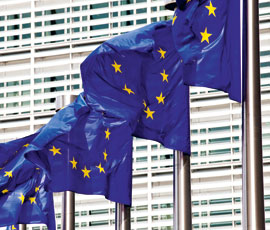 The EU’s Common Agricultural Policy (CAP) should remain in place under current market conditions, as scrapping it would threaten our food security, says a leading agricultural economist.

European Commission official John McClintock said: “There are still people who dream about the free market in agriculture, but the reality is that it could be socially disastrous.

“It could lead to food riots like we have seen in other parts of the world, such as Haiti.”

Politicians both in the UK and across the EU have been debating for years whether to scrap the CAP.

Some believe it does more harm than good, especially at a time when European countries are struggling with high levels of unemployment and bad economies.

Last week, Stuart Agnew MEP, the UKIP agricultural spokesman, excoriated the reforms, saying the EU “has become far too big to have a CAP”.

In particular, Mr Agnew accused farmers who receive huge subsidies for wind turbines and solar panels on their land as “robbing the poor to pay the rich”.

He was equally critical of the large amount of money the UK contributes to the EU budget, as the second largest net contributor.

However, Mr McClintock said scrapping the CAP would take away about half the income European farmers receive from direct payments and many “would not be able to survive”.

“It would be a big political issue. Food prices would go up, but we have to compensate farmers somehow,” he added.

Mr McClintock argued that up to now the CAP has been “fairly successful” at providing farmers with a standard living comparable to their fellow citizens in towns and cities – one of its main objectives.

Another objective of the CAP is to ensure there is always food in the shops and that the price is reasonable, he said.

The annual CAP budget is about €50bn, which represents about 40% of the total EU budget, less than 0.5% of GDP in the EU.

But Mr McClintock said although this figure was controversial, it represented good value for money for the EU’s citizens when you considered the benefits the CAP provided to wider society.

Firstly, Europe is largely self-sufficient in food and therefore we are not dependent on other countries for our food.

“Four years ago, there were food riots in 13 other countries in the world. There weren’t any in Europe because we have ensured our farmers remain in business and efficient from a technical point of view,” said Mr McClintock.

Secondly, funding from the CAP helps keep the countryside in Europe alive.

“We still have people living and working in the countryside, maintaining the natural resources – the landscapes, the soil, the biodiversity, the forests, the rivers, etc,” said Mr McClintock.

“The countryside has not been abandoned. That is because we have kept the farmers fair. We have ensured they have some sort of living.

They have not upped sticks and deserted the countryside in search of jobs in towns and cities, which has happened in other countries, especially South America.”

Negotiations are intensifying at EU level aimed at reforming the CAP from 2014-2020. The proposals are aimed at strengthening the competitiveness and sustainability of the CAP.

* Mr McClintock was speaking to journalists assembled from across Europe at a recent study tour in Brussels, organised by the European Network of Agricultural Journalists (ENAJ).