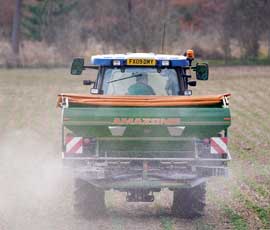 Lack of demand combined with currency factors has led to a drop in some fertiliser prices. At between £270/t and £290/t delivered to farm for September, urea is very competitive against ammonium nitrate.


New production facilities coming on stream in Algeria and elsewhere mean that there is plenty of product about.


At the same time there is heavy pressure on farm cashflow and harvest is taking priority. In addition, the experience of last season when nitrogen prices moved in only a very narrow range gives little incentive to buy forward.


“Cashflow is a big consideration, whether from low yields last year in the arable sector or from the impact of high feed bills among livestock farmers,” said David Mitchell, fertiliser manager at Wynnstay Group.


A weaker dollar is a significant factor in pushing urea prices down while UK ammonium nitrate prices have stabilised in a range from £266/t to £270/t delivered in September on normal payment terms.


Sellers say that forward commitment by farmers is at just 30-50% of normal levels with a lack of faith in forward buying playing a large part in this despite a significant growth in the availability of trade credit terms.


Prices are not expected to change much in the coming weeks and Anglia Farmers’ Chris Haydock advised that with the market weak and cashflow tight, farmers should keep an eye on it and buy product as it is needed.


Urea prices were currently in a lull and probably presented a buying opportunity but were not something people were paying attention to just now, said Gleadell fertiliser manager Calum Findlay.


Sellers will be hoping for a busy October/November period but warn that as last spring, logistics could become a problem if ordering is concentrated into just a few weeks in the run up to Christmas.


Against the background of poor demand and changes to marketing agreements, phosphate and potash prices have also fallen to their lowest for the past three years. A concern would be farmers being forced by cashflow pressure to take a P and K holiday, said Mr Mitchell.