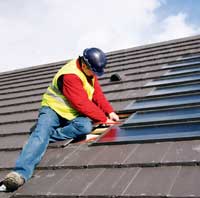 Figures from renewable energy advisors Regen SW showed 97% of the 2451 new projects set up in the region during 2010/11 were solar PV schemes, generating 22.77MW of electricity.

Wind, hydro, anaerobic digestion and electricity generation from landfill gas made up the remainder.

Solar PV uptake was driven by the attractive Feed-in Tariff payment. Most were domestic systems, but there were a number of larger schemes, the biggest being a 200kW roof-mounted array at Michael Eavis’s Worthy Farm in Somerset.

No large-scale solar farms have been installed in the southwest to date, although a number have been approved and are expected to be built before the results of the Feed-in Tariffs fast-track review are implemented this summer. Regen SW said new applications for large-scale PV arrays had been brought to a “virtual halt” since the review was announced.

Renewable heat production also grew steadily in the southwest in 2010/11, with 3966 new projects generating 20.99MW. Biomass units made up most of this, accounting for 80% of new capacity, with solar thermal and heat pumps contributing to the remainder.