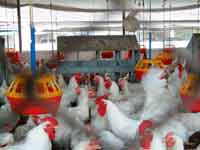 Beef and poultry producers face a massive loss of revenue if free-trade talks, due to resume between the EU and the Mercosur group of South American countries, lead to an opening up of agricultural markets.

The EU Commission has just agreed that trade talks with Brazil, Argentina, Uruguay and Paraguay should be re-launched – a process that is expected to get the official go-ahead at an EU:Latin American summit on 18 May.

It argues that gains to the EU economy from increased access to South American markets for things like telecommunications, financial services and cars would outweigh losses felt by the EU agriculture sector.

It is understood that EU agriculture commissioner Dacian Ciolos was against the plan to reopen the talks that previously collapsed in 2004.

It has been estimated that a new deal, based on the previous plan to cut tariffs and increase quotas, would cost EU agriculture between €3bn and €5bn (£2.6-£4.3bn) in lost revenue, with beef and poultry producers bearing the brunt.

An internal note circulated by the commission notes that France, the UK, Romania, Hungary and Poland would be especially badly hit, with the poultry sector accounting for 9-12% of total agricultural output in these countries.

In some regions, the concentration of poultry production is more than 70% of agricultural output.

The note also points to serious losses for beef producers in Belgium, France, the UK, Spain and Ireland.

EU Commission president Jose Manuel Barroso has tried to reassure the farming industry. “We will address any adverse impact on certain sectors with specific measures, especially in agriculture,” he said this week.

“This would lead to a substantial contraction in the EU agriculture sector, threatening 28m jobs.

“Imports from these countries do not have to comply with the same high food safety, animal welfare and environmental standards that EU farmers do,” he added.

It is understood that the Spanish presidency of the EU is keen to advance the Mercosur trade talks, to stimulate the economy as it struggles to recover from recession.

* For more on this story see Phil Clarke’s Business Blog