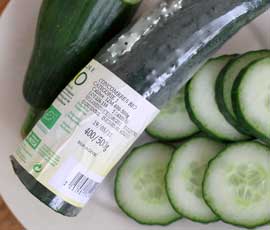 Farmers in Spain are demanding compensation after being blamed for an outbreak of E coli which left 16 people dead and more than 1,000 people ill.

Producers have been left with losses worth up to £120m a week after countries across Europe banned the sale of Spanish salad produce over fears imported cucumbers had been infected with the deadly strain of the E coli bacterium.

Concerns over the safety of Spanish cucumbers were raised after 15 people in Germany and one person from Sweden died from the virulent O104 strain of E coli.

More than 1,000 other cases of the disease have also been confirmed, with people testing positive for the disease in the UK, France and Spain following trips to Germany.

A strain of the bacterium was reportedly found on cucumbers in Germany which had been imported from two Spanish organic cucumber distributors in Almeria and Malaga. Cucumber batches in Denmark were also undergoing tests with the results expected in the coming days

But tests on the Spanish produce found it was not responsible for the outbreak in Germany, which causes potentially fatal kidney problems.

Despite the results several countries have restricted the sales of salad produce from Spain.

Russia banned all tomatoes, cucumbers and salad from Germany and Spain and threatened to extend the ban to the whole of Europe.

Spain’s farm minister, Rosa Aguilar, condemned the way the outbreak had been handled and demanded compensation for farmers for their loss in sales.

Speaking at the Informal Council of Farm Ministers in Debrecen, Hungary on Tuesday (31 May), she said restrictions on Spanish produce had been put in place “without clear and reliable data”.

“The situation is very serious for the Spanish fruit and vegetable sector with losses amounting to more than €200m per week,” she said.

“The fact is that all people affected have had contact with Germany [and the fatal E coli type] up until now has not been found or identified in Spanish territory.”

The EU should provide compensation “not only for Spanish producers but for all European producers affected by this situation,” she added.

Dutch junior minister Henk Bleker said the Netherlands was also being hard hit by a dive in sales to Germany that normally total several million euro per week.

German ministers said the European Commission needed to examine the possibility of providing aid to European vegetable producers as all EU producers were being affected by the outbreak.