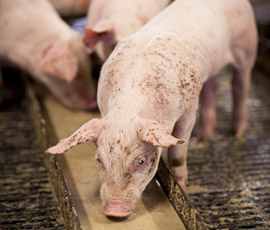 With only three-and-a-half clear slaughtering weeks between now and Christmas, pig prices have remained remarkably firm at a time of year when extra numbers being brought forward tend to undercut the market.

The Deadweight Adjusted Pig Price for the week ended 25 November rose a further 0.23p/kg to stand at 147.48p/kg and all of the weekly contract prices published by the five leading abattoirs remained as follows:

Spot bacon buyers have also been operating at positive stand on levels with most pigs traded within a very narrow 148-150p/kg band, according to specification.

The relative weakness of the euro, which closed on Friday (25 November) worth 85.63p has done nothing to undermine the cull sow market where prices have moved up 1-2p this week to hit the 120p/kg mark for those selling large loads.

This further underlines stable EU pigmeat prices and is painting a much more positive picture for UK pig producers as the New Year approaches.

Weaner prices continue to stage a modest recovery with the latest Agricultural and Horticulture Development Board 30kg ex-farm weaner quote rising to £42.25 a head, but reports of spot weaners traded at £4-6 above this where something of a sellers’ market is emerging.

The improvement in weaner prices has been partly fuelled by further reductions in cereal values with the latest ex-farm feed wheat quotes dropping to £137/t compared with £190/t at the start of the year.